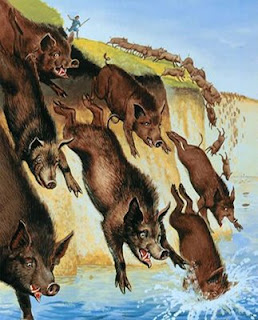 Jesus Brings Release from the Bonds of Sin, Death and the Devil

Prayer for those involved in occult practices or afflicted by demons: O God, almighty Father, You told us through Your Son, "Truly, truly, I say to you, whatever You ask of the Father in My name, He will give it to you." He has commanded and encouraged us to pray in His name, "Ask, and you will receive," and has also said, "Call upon Me in the day of trouble; I will deliver You, and you shall glorify Me." We unworthy sinners, relying on these Your words and command, pray for Your mercy with such faith as we can muster. Graciously free [name] from all evil, and undo the work that Satan has done in [him/her], to the honor of Your name and the strengthening of the faith of believers; through the same Jesus Christ, Your Son, our Lord, who lives and reigns with You and the Holy Spirit, one God, now and forever. Amen.

Collect for Proper 7 O God, You have prepared for those who love You such good things as surpass our understanding. Cast out all sin and evil desires from us and pour into our hearts Your Holy Spirit to guide us into all blessedness; through Jesus Christ our Lord…

The Lord finds those who did not seek Him or ask for Him. He spreads out His hands “to a rebellious people” (Isaiah 65:2) and calls them to be His people and to dwell in peace upon His holy mountain (Isaiah 65:9). For wherever Jesus Christ enters in, Satan is cast out. Those who were enslaved and driven mad by the assaults and accusations of the devil, are set free by the Word of Christ. He drowns and destroys the old Adam in us with the waters of Holy Baptism and thereby brings us out of death into life. No longer naked in our shame, living “among the tombs” (Luke 8:27), we are brought into the Lord’s house, fully clothed by Christ; for He has come, in “the fullness of time” (Galatians 4:4) to fulfill the Law on our behalf and to redeem us from its every accusation. Therefore, having been justified by His grace through faith in His Gospel, “you are no longer a slave, but a son” (Galatians 4:7).

A sick and suffering slave. Next, a dead man. Followed by a prostitute.  Now, today, a lunatic. Controlled by demon possession. Luke piles one story on top of another showing how Jesus is willing to include those who are seen as contaminated and corrupted. They are the unclean.

26 Καὶ κατέπλευσαν εἰς τὴν χώραν τῶν Γερασηνῶν, ἥτις ἐστὶν ἀντιπέρα τῆς Γαλιλαίας.
Then they sailed to the country of the Gerasenes,[a] which is opposite Galilee.

27 ἐξελθόντι δὲ αὐτῷ ἐπὶ τὴν γῆν ὑπήντησεν ἀνήρ τις ἐκ τῆς πόλεως ἔχων δαιμόνια• καὶ χρόνῳ ἱκανῷ οὐκ ἐνεδύσατο ἱμάτιον, καὶ ἐν οἰκίᾳ οὐκ ἔμενεν ἀλλ’ ἐν τοῖς μνήμασιν.
When Jesus[b] had stepped out on land, there met him a man from the city who had demons. For a long time he had worn no clothes, and he had not lived in a house but among the tombs.

A nameless man has been exiled to the margins of human existence. He's filthy. Naked in public. He can't control his speech. He's so violent that people can't come near him. All attempts to restrain him have failed. He exhibits the most common form of self-harm even today — self-mutilation. He suffers from demon possession.

The maniac is untouchable.  The people of the town had decided that he was good for nothing.  His uncontrollable rages have brought them to drastic measures.  They have put him in chains and chained him among the dead. In the town cemetery. Where his roaring would bother the living less. And so, his community did what we still do today. They banished the man. To the safe and solitary margins of society.

28 ἰδὼν δὲ τὸν Ἰησοῦν ἀνακράξας προσέπεσεν αὐτῷ καὶ φωνῇ μεγάλῃ εἶπεν• Τί ἐμοὶ καὶ σοί, Ἰησοῦ υἱὲ τοῦ θεοῦ τοῦ ὑψίστου; δέομαί σου, μή με βασανίσῃς•
When he saw Jesus, he cried out and fell down before him and said with a loud voice, “What have you to do with me, Jesus, Son of the Most High God? I beg you, do not torment me.”

“You believe that God is One, you do well, even the demons believe and shutter.” – James 2:19

29 παρήγγελλεν γὰρ τῷ πνεύματι τῷ ἀκαθάρτῳ ἐξελθεῖν ἀπὸ τοῦ ἀνθρώπου. πολλοῖς γὰρ χρόνοις συνηρπάκει αὐτόν, καὶ ἐδεσμεύετο ἁλύσεσιν καὶ πέδαις φυλασσόμενος, καὶ διαρρήσσων τὰ δεσμὰ ἠλαύνετο ὑπὸ τοῦ δαιμονίου εἰς τὰς ἐρήμους.
For he had commanded the unclean spirit to come out of the man. (For many a time it had seized him. He was kept under guard and bound with chains and shackles, but he would break the bonds and be driven by the demon into the desert.)

Even so, he manages to escape now and then and takes off into the woods.  Why does he return? Because they go after him.  Because there is nowhere else to go.  Because hunger brings him back to the food, they will supply him.

"My name is Legion!" this homeless man screamed. "For we are many." Tortured in body, mind, and spirit, he embodied the scope of human suffering. For a Roman "legion" consisted of 5,000 soldiers.

31 καὶ παρεκάλουν αὐτὸν ἵνα μὴ ἐπιτάξῃ αὐτοῖς εἰς τὴν ἄβυσσον ἀπελθεῖν.
And they begged him not to command them to depart into the abyss.

32 Ἦν δὲ ἐκεῖ ἀγέλη χοίρων ἱκανῶν βοσκομένη ἐν τῷ ὄρει• καὶ παρεκάλεσαν αὐτὸν ἵνα ἐπιτρέψῃ αὐτοῖς εἰς ἐκείνους εἰσελθεῖν• καὶ ἐπέτρεψεν αὐτοῖς.
Now a large herd of pigs was feeding there on the hillside, and they begged him to let them enter these. So he gave them permission.

In an unclean town, a town on the far side of the Sea of Galilee, a town in which  people made their living by herding pigs. Jewish law tells us the pig is an unclean animal.  But the town knew of no such law. They found it profitable. To raise them and sell them to their pagan neighbors who were pork eaters.

The swine, in horror at their own corruption by unclean spirits, run to the edge of the cliff.

34 Ἰδόντες δὲ οἱ βόσκοντες τὸ γεγονὸς ἔφυγον καὶ ἀπήγγειλαν εἰς τὴν πόλιν καὶ εἰς τοὺς ἀγρούς.
When the herdsmen saw what had happened, they fled and told it in the city and in the country.

35 ἐξῆλθον δὲ ἰδεῖν τὸ γεγονὸς καὶ ἦλθον πρὸς τὸν Ἰησοῦν, καὶ εὗρον καθήμενον τὸν ἄνθρωπον ἀφ’ οὗ τὰ δαιμόνια ἐξῆλθεν ἱματισμένον καὶ σωφρονοῦντα παρὰ τοὺς πόδας τοῦ Ἰησοῦ, καὶ ἐφοβήθησαν.
Then people went out to see what had happened, and they came to Jesus and found the man from whom the demons had gone, sitting at the feet of Jesus, clothed and in his right mind, and they were afraid.

Now the people come running. They crowd around. Horrified at the loss of their valuable swine.

36 ἀπήγγειλαν δὲ αὐτοῖς οἱ ἰδόντες πῶς ἐσώθη ὁ δαιμονισθείς.
And those who had seen it told them how the demon-possessed[c] man had been healed.
The man who was freed from his long and lonely days of isolation and terror went about telling anyone who would listen how much God had done for him. And we need to be clear on this. It is, “How much God has done…” not how much you have done. We bear the message of freedom from evil dark powers. But it is Christ who secures this freedom.

37 καὶ ἠρώτησεν αὐτὸν ἅπαν τὸ πλῆθος τῆς περιχώρου τῶν Γερασηνῶν ἀπελθεῖν ἀπ’ αὐτῶν, ὅτι φόβῳ μεγάλῳ συνείχοντο• αὐτὸς δὲ ἐμβὰς εἰς πλοῖον ὑπέστρεψεν.
Then all the people of the surrounding country of the Gerasenes asked him to depart from them, for they were seized with great fear. So he got into the boat and returned.

And they are terrified of Jesus – so terrified they ask Him to leave.

38 ἐδεῖτο δὲ αὐτοῦ ὁ ἀνὴρ ἀφ’ οὗ ἐξεληλύθει τὰ δαιμόνια εἶναι σὺν αὐτῷ• ἀπέλυσεν δὲ αὐτὸν λέγων•
The man from whom the demons had gone begged that he might be with him, but Jesus sent him away, saying,

The man who sat at Jesus' feet and who learned from Him wants to go with them. And what are his options? He is standing on the beach with Jesus. The disciples in the boat are in front of him. The townsfolk who banished him to the graveyard are at his back.

39 Ὑπόστρεφε εἰς τὸν οἶκόν σου, καὶ διηγοῦ ὅσα σοι ἐποίησεν ὁ θεός. καὶ ἀπῆλθεν καθ’ ὅλην τὴν πόλιν κηρύσσων ὅσα ἐποίησεν αὐτῷ ὁ Ἰησοῦς.
“Return to your home, and declare how much God has done for you.” And he went away, proclaiming throughout the whole city how much Jesus had done for him.

To others along the way, Jesus had issued the invitation, "Come, and follow Me." But to this one He says, "Return to your home, and declare how much God has done for you."

This isn't simply a story of one man's healing.  It’s a story of one man's calling. Jesus does bid the man to follow; but in this case, the following involves staying rather than leaving. Jesus does not reject the man's application to be a disciple. He accepts it fully. “I even have a first appointment all lined up for you,” Jesus says from the boat. “Your congregation…is standing right behind you. Now, go and tell....”