Friday prior to Pentecost 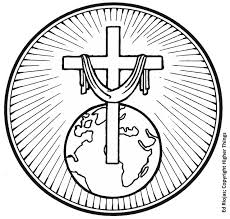 John 14:23-31— In the gospel lesson Jesus reminds us that love and obedience are linked. How can we trust, love and obey? By ourselves we cannot do it. Thus the Counselor is sent from the Father. Both the Father and the Son are involved in the sending of the Spirit. The Spirit reminded these early disciples of everything Jesus had said and done. Thus when their message went out, as they recorded the words and actions of Jesus in written form they became literally God breathed and inspired. They became the Sacred Scriptures because the Spirit directed these men over a period of some twenty years to write 27 books that in reality make up one book – the New Testament. These books, together with the Old Testament, have one doctrinal viewpoint, one moral standard, one plan of salvation, one program for the ages.

Jesus renders not only an indictment but also a conviction on three counts. The word used for “convict” is straight out of the courtroom.

The Paraclete will expose the sin of failure to discern God in Christ and those, “who believe in Him.” The world is to be convicted of the sin inherent in the rejection of Jesus.

The Paraclete will convince the world of both the justice of God and the inevitability of God’s judgment. The world will be judged, and the outcome of that judgment is already determined, because the prince of this world has been judged. In the redemptive act Jesus is victorious. He has conquered Satan. Luther’s words are appropriate here. “He’s judged, the deed is done, one little word can fell him.” What is that one little word? With respect to faith; that singular word is, “Jesus.” With respect to the Devil; the particular word is, “Liar!”

Collect for the mission of the Church: Almighty God, You have called Your Church to witness that in Christ You have reconciled us to Yourself. Grant that by Your Holy Spirit we may proclaim the good news of Your salvation so that all who heart it may receive the gift of salvation; through Jesus Christ our Lord.  [2]– 03 June, 2022