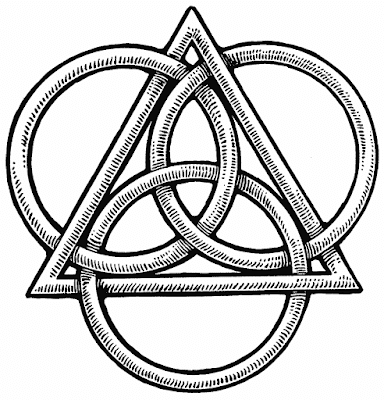 Proverbs 8:1–4, 22–31
Acts 2:14a, 22–36
John 8:48–59
Collect for Trinity – Almighty and everlasting God, You have given us grace to acknowledge the glory of the eternal Trinity by the confession of a true faith hand to worship the unity in the power of the Divine Majesty. Keep us steadfast in this faith and defend us from all adversities; for you, O Father, Son, and Holy Spirit, live and reign one God, now and forever.

The Triune God Reveals Himself in Christ Jesus

The divine Word of the Father is also the holy Wisdom who “was beside him, like a master workman,” who “was daily his delight, rejoicing before him always” (Prov. 8:30).

This Word became flesh and suffered death, in order to bestow life by the preaching of His Gospel “to the children of man” (Prov. 8:4).

He honors the Father, and the Father glorifies Him by raising Him from the dead, so that all who keep His Word “will never see death” (John 8:51).

As He “received from the Father the promise of the Holy Spirit” (Acts 2:33), so it is by and through the Son that God the Father pours out the Holy Spirit upon His Church.
-----
John 8:48 –
Ἀπεκρίθησαν οἱ Ἰουδαῖοι καὶ εἶπαν αὐτῷ• Οὐ καλῶς λέγομεν ἡμεῖς ὅτι Σαμαρίτης εἶ σὺ καὶ δαιμόνιον ἔχεις;
"you're worse than a Samaritan!" You have a demon!  See John 4 Jews and Samaritans had nothing to do with each other.  See verse 41, "we were not born of fornication"

John 8:49 –
ἀπεκρίθη Ἰησοῦς• Ἐγὼ δαιμόνιον οὐκ ἔχω, ἀλλὰ τιμῶ τὸν πατέρα μου, καὶ ὑμεῖς ἀτιμάζετέ με.
a demon I do not have but I honor my Father, and you dishonor me.

John 8:50 –
ἐγὼ δὲ οὐ ζητῶ τὴν δόξαν μου• ἔστιν ὁ ζητῶν καὶ κρίνων.
but I do not seek my glory but there is one who seeks and judges.

John 8:51 –
ἀμὴν ἀμὴν λέγω ὑμῖν, ἐάν τις τὸν [b]ἐμὸν λόγον τηρήσῃ, θάνατον οὐ μὴ θεωρήσῃ εἰς τὸν αἰῶνα.
truly I say to you whoever keeps my word will not taste death into the age. "Whoever believes in me will never die." Into the age they will NOT, no way no way, ever behold death into the age. Will not be dead forever.

See the first resurrection in Revelation 20:5-6

John 8:53 -
μὴ σὺ μείζων εἶ τοῦ πατρὸς ἡμῶν Ἀβραάμ, ὅστις ἀπέθανεν; καὶ οἱ προφῆται ἀπέθανον• τίνα [d]σεαυτὸν ποιεῖς;
You certainly are not greater than Abraham, he died as did the prophets. Who do you make yourself out to be?

John 8:54 –
ἀπεκρίθη Ἰησοῦς• Ἐὰν ἐγὼ [e]δοξάσω ἐμαυτόν, ἡ δόξα μου οὐδέν ἐστιν• ἔστιν ὁ πατήρ μου ὁ δοξάζων με, ὃν ὑμεῖς λέγετε ὅτι θεὸς [f]ἡμῶν ἐστιν,
If I glorify myself it's means nothing. It is My Father whom you say is your God is glorifying me.

Reference to the unity of the godhead.

John 8:55 -
καὶ οὐκ ἐγνώκατε αὐτόν, ἐγὼ δὲ οἶδα αὐτόν• κἂν εἴπω ὅτι οὐκ οἶδα αὐτόν, ἔσομαι ὅμοιος [g]ὑμῖν ψεύστης• ἀλλὰ οἶδα αὐτὸν καὶ τὸν λόγον αὐτοῦ τηρῶ.
you have not known Him and continue not to know him, I know Him, and if I say I do not know him, I am a liar like you, but I do know him and keep his word.

Here "know" = to be intimately acquainted with.

(See Genesis 15 Word of the a Lord came... See Abraham's sacrifice of Isaac...) "my day" is this the crucifixion/resurrection?

John 8:59 –
ἦραν οὖν λίθους ἵνα βάλωσιν ἐπ’ αὐτόν• Ἰησοῦς δὲ ἐκρύβη καὶ ἐξῆλθεν ἐκ τοῦ [a]ἱεροῦ.
At this, they picked up stones to stone him. But Jesus hid himself, slipping away from the temple grounds.

Almost like "and it was night" this is it. The glory has left.  They had forgotten the Lord's acts of redemption e.g. The Passover. See the words of Stephen in Acts 7 "you are rejecting the Holy Spirit just as your Father's"

Possible Sermon idea taken from the standpoint of the Jews, "Can you believe what this Jesus had to say?"