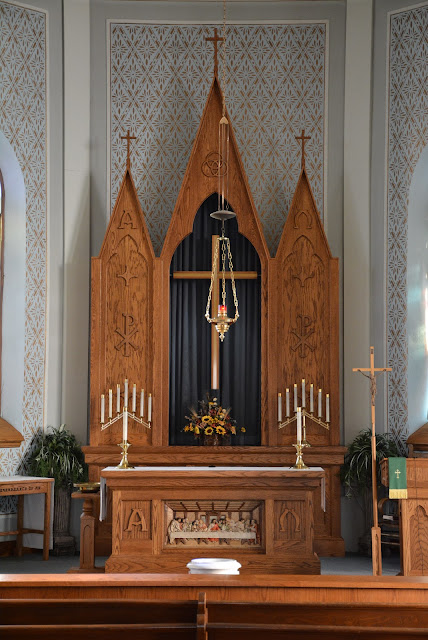 My sheep hear my voice, and I know them, and they follow me.  I give them eternal life, and they will never perish, and no one will snatch them out of my hand.  John 20:27-28

Christ the life of all the living,
Christ the death of death, our foe,
Who, Thyself for me once giving
To the darkest depths of woe;
Through Thy sufferings, death and merit
I eternal life inherit,
Thousand, thousand thanks shall be,
Dearest Jesus unto Thee.

Thou has suffered great affliction
And has borne it patiently,
Even death by crucifixion,
Fully to atone for me;
Thou dist choose to be tormented
That my doom should be prevented,
Thousand, thousand thanks shall be,
Dearest Jesus, unto Thee.[1]

Death is so limited…

It has not quenched the Spirit,
It cannot, has not,
Nor will not lessen the power of the resurrection of Jesus Christ![2]

Marvin Conrad has laid for us a firm foundation, a legacy of family life and faith. He has established for us an example of a life well lived. Married to Laurina for seventy-six years both of them; together, have by example, shown us how to live a committed life born by an enduring steadfast faith in Christ. Together they shared core values and interests. They had a similar outlook on life.

Marvin was known for his strong opinions. Which, varied. Yet, at the same time, he knew the art of disagreeing without being disagreeable. He had the perspective of time.  He remembered the past. Which he could relate to our present time.

On his ninety-eighth birthday, I asked him, what was the most significant change he had witnessed in his lifetime. Immediately he responded. “Rubber tires!” He explained. Farmers were limited to lugged cast iron and steel implements and wheels. With the addition to rubber, transportation and commerce opened up. Now we can travel around the world and communicate with friends and family within seconds. Such innovation opened up the world for us to enjoy. And it all started with…rubber tires. He had such a unique perspective on the world.

Various contemporary issues fascinated him.  His interests were diverse and wide-ranging from the economy, to politics, to farming practices, and even the weather. He was always up to date on the current commodity prices.

He embraced technology. He would surf the internet to find a German speaking news source so he could keep up with his language skills. He knew exactly what my children we up to as he stalked them on facebook. He even sold items on e-bay!

In the book of Acts, (9:39) Luke recounts for us the occasion of the death of a woman named Dorcas. As Peter arrives at the house in Joppa there were widows weeping showing him the coats and garments, which Dorcas made while she was with them. She had made them up herself for them. They were moved to tears. As they remembered her kindness and generosity. Those objects spoke of her diligence and industry, her humility, as well as her charity.

The same can be said of Marvin. His faith in Jesus Christ was as sturdy as his carpentry work. The homes, which he built, his craftsmanship, stands as a testimony of his life’s work. He met the needs of others with compassion. Once he reduced a tenant’s rent because she was a single mom raising three children. “What’s a fella to do?” he asked me. “Raise her rent? Life is hard. I remember living through the Depression…”

What he built was meant to last. To stand the test of time. Look around this room. The décor is his signature - from the sanctuary’s altar and redoes, the pulpit steps, the sacramental table,  the lectern, the processional cross, the trim which surrounds the window sills, the wood façade on the balcony were constructed by his gifted hands.

Today Marvin rests in repose in front of the alter he made with his old friend and business partner Walter Neurge. This altar has served us well. Especially in the Old Testament, the altar was significant. Noah offered burnt offerings to the Lord after the flood.  After Abraham had arrived at Moreh, after God had reappeared to him, he built an altar. When the Israelites were instructed to build the tabernacle, the Lord gave specific instructions for the altar in the courtyard for worshippers to use to offer their sacrifices. (Exodus 27:1–8)

Our altar is in the form of a table.  It is here where our Lord Jesus serves us as both host and meal at His banquet feast.  As our Lord’s body was stripped in crucifixion, so our altar is stripped of its coverings during this season of Lent. Especially for those persons who are visual learners these furnishings have enhanced and enriched their faith.

On the day of his confirmation, these words were spoken over Marvin. My sheep hear my voice, and I know them, and they follow me.  I give them eternal life, and they will never perish, and no one will snatch them out of my hand. -  John 20:27-28

Born of a simple faith Marvin Conrad knew the story of his salvation. He understood the doctrine by which the Church stands or falls — justification, which simply says that Jesus comes to us to set us free from all sin which is received as a gift by grace alone  through faith alone, through Christ alone!

Man has no active role in his justification: he is the passive recipient entirely. He was lifeless and unresponsive - but now he is alive. He was guilty, - but now he is forgiven. He was unrighteous, - but now he has been declared righteous.

You need to be told that you are reconciled to God. Yes, sometimes it hurts, to hear what pains you have caused, but it’s the hurt of a salve being applied to a wound, a hurt, which turns to comfort. You need to be told, Jesus has forgiven you all of your sins and you are free in Christ.

Such is the creed and faith that Marvin Conrad lived by. He knew the voice of His Shepherd. Now he sees his face. No, this is not the last good-by. For soon, and very soon, we shall see the King. When He comes in His glory. Until that time, we now live by faith until we are ushered into the Lord’s glorious kingdom, a kingdom that knows no end.

Thanks be to God. Marvin Conrad has landed safely at home. And when we are untied what conversations we will have. I’m ready for our next talk. How about you?

May this be our motto that we are strangers and aliens in this place. Until we are gathered - where we shall never be separated by time, distance or space. Comfort yourselves by these sure words, “But our citizenship is in heaven, and from it we await a Savior, the Lord Jesus Christ, who will transform our lowly body to be like his glorious body, by the power that enables him even to subject all things to himself.”  –Philippians 3:20