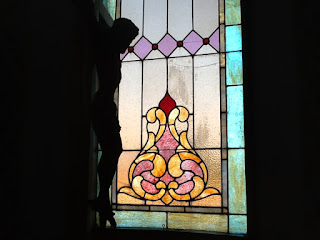 “God of love, You know our frailties and failings. Give us Your grace to overcome them; keep us from these things that harm us; and guide us in the way of salvation.”

Jesus gives yet another parable. This time. Two sons. The meaning of this story is crystal clear. The first son stands for the tax collectors and sinners. Their lifestyle looked like a blunt refusal to have anything to do with religion or God. And yet when Jesus came they listened to him and changed their way of life to fit to His message and meet his demands.

The second son stands for the priests, scribes, and Pharisees. They had only one profession in their lives that they would serve God and obey his commandments; and yet when the Son of God came they completely ignored Him and in the end they crucified Him.

There is a difference in the way the two sons responded to their father's request. The first son answers with almost despicable bluntness. On the other hand, the second son says all things with great respect and politeness. He even adds "sir" at the end of every sentence. But neither the verbal courtesy, nor the politeness could take the place of deeds. It is true that only through deeds we can prove that we really love someone.

A.    He had respect and piety — He was very polite and respectful of his father. He was reverent. He addressed him as “Sir.” This son said he would go to work in the vineyard as the father expected. He gave the right answer and showed the proper reverence. He was saying yes but living no. He offered to work then refused to go.

He was not as good as his word. This son represents “religious people” who know the right things to say in worship and prayer and in life.

They consent to God’s laws and make promises to obey, but do nothing. In this American culture there are many who desire, “rigor without submission.

They gave confession without execution.  They have orthodoxy without obedience.”[2] Like this young man they offer only hollow promises.

Jesus says these people do not get into the kingdom. They failed to repent. The Savior points out that a superficial and artificial connection with God does not count. How so? They fail in two respects.

B. They give only lip service. — He said emphatically: “I go.” These are the obedient ones. Who refuse to follow. They will not comply. They have their own agenda and plan. They see no need for Christ. Or they approach Him on their own terms.

C.     Yet it is the Spirit who draws us to the waiting arms of the Father. It is the Lord Jesus, who bore the burden of the cross wiping clean the note which read “This! You owe!” Now it declares, “Paid in full!”

Says, St. Paul, “Have this mind among yourselves, which is yours in Christ Jesus, 6 who, though he was in the form of God, did not count equality with God a thing to be grasped, 7 but emptied himself, by taking the form of a servant, being born in the likeness of men. 8 And being found in human form, he humbled himself by becoming obedient to the point of death, even death on a cross.” – Philippians 2:5-8 “For our sake he made him to be sin who knew no sin, so that in him we might become the righteousness of God.” – 2 Corinthians 5:21

Transition: The way of righteousness is that Jesus calls us; sinful sons to enter the kingdom through repentance and reliance in Christ. This involves sorrow over our sins and faith that the Father has forgiven our sins and declared us righteous because of the life, death and resurrection of Jesus Christ. By the power of the Holy Spirit He gives us a God given resolve to be righteous in our everyday life.

2. The second son —He’s the other son. The boy who at first responds negatively. At first he spurned his father.  v. 29. He turned in repentance and He obeyed the word of his father.

A. He repented —here is a case of repentance in action. There was an “about face” in his life. This son refused to go to work in his father’s vineyard. Then he changed his mind and went to work.

This about-face, this change of mind from disobedience, from no to yes, from going in the wrong direction to turning in the right direction is the face; the expression of repentance. When the religious leaders heard the Baptist’s call to repentance, they did not heed it, while the sinners responded in contrition and faith. It was shocking to the professional religious leaders that Jesus claimed the sinners and not the religious ones were in the kingdom. The other son is a sinner –yet saved by grace.

B. He repented –He turned from his sinful ways. He came to the understanding that he was in need of a change in his life. He turned from his evil ways. The way of righteousness is that Jesus calls us sinful sons to enter the kingdom through repentance.

This involves sorrow over our sins; and faith that the Father has in fact forgiven our sins and declared us righteous for Jesus’ sake. Christ alone is our peace. He Himself bore of infirmities.

As Peter has taught, “When they heaped abuse on Him, He did not retaliate; when He suffered, He made no threats, but entrusted Himself to Him who judges justly. 24He Himself bore our sins in His body on the tree, so that we might die to sin and live to righteousness. “By His stripes you are healed.” 25For “you were like sheep going astray,” but now you have returned to the Shepherd and Overseer of your souls. – 1 Peter 2:23-25

C. He Obeyed — “He went.” He was the disobedient boy the defiant son, the insubordinate one the one who now obeys.

1. They turn from evil to good which moved Joseph. “But Joseph replied, “Do not be afraid. Am I in the place of God? As for you, what you intended against me for evil, God intended for good, in order to accomplish a day like this— to preserve the lives of many people. Therefore do not be afraid. I will provide for you and your little ones.” So Joseph reassured his brothers and spoke kindly to them.” – Genesis 50:19 -21

2. They respond to Christ in faith. Not by making yourself better, or by trying hard to get it right. To be a Christian, you simply turn to the Lord in pure, surrendering, all-or-nothing faith. We are all sinners in need of grace, that Jesus died for us, and that He rose again so that we can be made new. Life must be all about Jesus. He is Lord. He sows His Word in fertile soil, and it’s by His grace that we believe and bear fruit.

Notice that there is action to the young man’s resolve. By the power of the Holy Spirit there is a God pleasing resolve to be righteous. It is Jesus Christ who has changed us. It is His Holy Spirit which works in us to will and to do the Father’s good and gracious will.

"Which of the two did the will of his father?" They said, "The latter." Jesus said to them, "Truly I say to you that the tax-gatherers and harlots will get into the kingdom of God before you.” -Matthew 21:31

The good news is that we don’t have to find the help, the guidance, the support and strength; they have found us—in the person and work of Jesus the Christ. He who has entered the kingdom through repentance loves not just in word but in deed and in truth; his faith is not dead, without works, but alive and bearing fruit.

[2] BOBO’s in Paradise The New Upper Class and How They Got There, David Brooks © 2001, Simon & Schuster - The thesis is that during the late 1970s a new establishment arose that represented a fusion between the bourgeois world of capitalist enterprise and the hippie values of the bohemian counterculture. He refers to these individuals as bobos, a portmanteau word for "bourgeois bohemians".

“This bobo reconciliation I talk about is really a product of the information age, what they're creating, because in this economy, ideas and information are as important to creating wealth as natural resources and finance capital. So the people who thrive are the ones who can take ideas and emotions and turn them into products. So they really do have one foot in the world of Bohemia, which are ideas, emotions, creativity, and one foot in the world of the bourgeoisie, which is the world of the marketplace. And that's what's reconciled this 150-year-old culture war between the Bohemians and the bourgeoisie.”