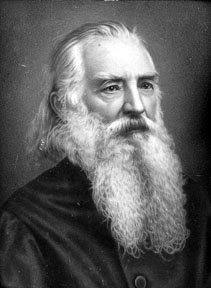 FCD Wyneken arrived at our congregation for the very first time.

Father, You show Your almighty power in Your mercy and forgiveness. Continue to fill us with Your gifts of love. Help us to hurry toward the eternal life You promise and come to share in the joys of Your kingdom. Grant this through our Lord Jesus Christ, Your Son, who lives and reigns with you and the Holy Spirit, one God, forever and ever. Amen [1]

When unemployment figures are released for the nation, the state, or the local community people take notice.  The goal is always to have zero unemployment. In America, most are happy with rates ranging between 5- 6% unemployment or less.  Unemployment means poverty, enforced idleness, increase in crime, welfare payments etc.

In the Father’s Kingdom there is not to be any unemployment.  The householder goes to the marketplace at different times of the day and asks, “Why do you stand here idle all the day? Come and work for Me!”

And there will be some, those in the middle of the pack. They are neither privileged nor favored.

These are the ones who, simply by hard work and sheer determination will succeed. And we will applaud their efforts.

Some get that lucky break that sets their career on a trajectory that only goes up. For others, the break does not come.    Some live a life of privilege. Others not. Some make it because they out work everyone else. The Lord’s economy is different.

When Jesus repeats Himself pay attention.  He never wastes words. He’s not taking up dead air space. He’s speaking an intense and powerful truth. Never shallow. Always sincere.  Jesus tells us, “Many who are first will be last and the last first.” He speaks these words with respect to Peter’s response.

Pious Peter. He speaks for Himself. He speaks for the twelve. He speaks for you. Peter reminds the Lord what he has done. He has sacrificed.   He’s gone without.  He’s given up, forgone and forfeited many things for Jesus’ sake. “See we have left everything and followed you Jesus. What then will we have?”[2]

Jesus’ parable is a reaction to Peter's question. "We’ve given up everything." “What's in it for us?” Peter asks. Jesus tells this parable because mercy is being challenged.

The parable of the laborers in the vineyard reminds us that the Father’s generosity is equal to all. When payment time came for the laborers in the vineyard, it was learned that each was to receive equal pay regardless of hours worked. The reward is the same in the kingdom. Whether you enter early or late the payment is the same. The thief on the cross receives the same reward as the faithful Christian who lives eighty plus years. Who are you to spurn the Father’s mercy?

The landlord asked the workers to go into the vineyard agreeing to pay the workers a pre- determined amount.

The Father’s pay scale contradicts our notion of rewards. The Pharisees, grumbled about Christ’s gracious offer to sinners. Even Peter thought he and the other disciples should have received more than those who had not left their homes, their families and jobs to follow the Savior.

Yet the Lord deals fairly with you. The Father is an equal opportunity employer. Whatever you give up you receive back a hundred -fold, and finally you receive eternal life.

Jesus said “And everyone who has left houses or brothers or sisters or father or mother or children or fields for My sake will receive a hundred times as much and will inherit eternal life.” Matthew 19:29

2.      The wages are uniform – everyone gets the same.  "And when those {hired} first came, they thought that they would receive more; and they also received each one a denarius. Verse 10 (NAS)

The Lord has dealt fairly with you. No injustice has been done. You have received the agreed wage. He never promised to give you what you think you deserve for your efforts. Could it be that if you find yourself grumbling that it may reveal a loveless and unmerciful attitude? If this were so you are under Law instead of under grace more then you perhaps care to realize. If so, repent! Then receive the Lord’s mercy and His grace.

Yet, isn’t it wonderful that even those of us who worked only one hour also receiving a denarius?  There is a lesson to be learned here. The work itself is already a reward in and of itself! Just to be a Christian is a privilege. It is not a wearisome duty but a happy service, no matter how long the Father allows you to serve. There is no richer, fuller life than that of a disciple of Christ. The wage question in the kingdom need not trouble you. In the kingdom there is no unemployment, and the wage level is uniformly high.

The Father is generous to all —His grace.  His payment is not determined by wages or hours worked. The Lord is so generous that He gives the denarius of grace (salvation) to everyone regardless of length of service or quantity of work performed. He goes beyond justice to give His peace to all who come, whenever they come.

Jesus responds to Peter, “Truly, I say to you, in the new world, [a] when the Son of Man will sit on his glorious throne, you who have followed me will also sit on twelve thrones, judging the twelve tribes of Israel.  And everyone who has left houses or brothers or sisters or father or mother or children or lands, for my name's sake, will receive a hundredfold[b] and will inherit eternal life.  But many who are first will be last, and the last first.” [3]

3.      The wages are generous – The parable concludes: 'Is it not lawful for me to do what I wish with what is my own? Or is your eye envious because I am generous?' Verse 15 (NAS) So what does this all mean?

The Father lives up to His promise to pay. We might go back on our words and try to wiggle out of a commitment. Not so with your Savior. He has graciously promised that He will in no wise cast you aside. He went to the bloody cross on Good Friday to win for you salvation and life. There are literally hundreds of predictions in the Old Testament pointing to the cross. Jesus fulfilled them all and the payment for sin has been paid in full. The debt we owe has been paid.

The Father has a right to do what He pleases with His own. We are his workmanship. He is the one who deserves our praise. We are obligated to Him.

We are obligated to His Words and promises. He has the right to save and redeem those whom He pleases. This is why the landlord went back to the market place again – three times.

We should in no wise doubt that firmly believe then, that this gracious act of the Father is an indication of His good and gracious will toward us. Jesus came to seek and to save the lost.

The Father is generous to all. From His vantage point His wages are more than generous. Because of whom we are and the wrong we have done, we rightfully should not get anything from Him. We should get nothing but condemnation. The Lord gives His grace to all regardless of how long or how well they worked for Him.

Ours is to have the joy and the privilege of being in the kingdom and working for our heavenly Father. We do not serve for wages. You can never obligate a person for doing well. Our only reward is simply being in the Father’s house; serving in Him kingdom and doing His good and gracious will.

4. Some Grumble — vv. 8-15 “When evening came, the owner of the vineyard said to his foreman, 'Call the workers and pay them their wages, beginning with the last ones hired and going on to the first.'”

The housemaster is remembered for what he does. He hires workers. They don't apply.  These workers - they are of the same voice.  They all agree to work for a Denarius a day. It was a fair wage.

These workers are standing idle, doing nothing. Jesus uses the Greek word “argon” [4] which means “lazy” or “inactive”. It’s the same word for the same chemical element, which undergoes almost no chemical reactions. Literally, the gas does nothing.  These workers are hired at the 3rd hour, around 9 am

The housemaster continues. “I will pay whatever is right.” According to His goodness. According to His mercy, Christ redeemed you. This is the root of justification. To work in the vineyard is to give meaning to your life.

The housemaster. He did the same at the 6th and 9th hour. At noon and at 3 pm. He hires more workers.

“Why stand the whole day idle?”  This is the first time he speaks. Those first hired get what they bargained for the last receive grace!

They answer, “No one would have us.” These are the tax collectors and sinners. The rejects of this world.  These are the ones who the Master paid first although they worked less.

They didn't barging for it. They receive mercy. As Jesus reminds the religious elite, “Most certainly I tell you that tax collectors and prostitutes are entering into the Kingdom of God before you!”  [5]

The housemaster speaks. “Now pay them starting with those hired last.” The last-minute workers receive a Denarius. These were the ones no one else wanted.

There is a sense of entitlement. Those hired first, they expected more. They were looking for justice instead of mercy.

“You make them equal to us,” they argue. We sweated, they didn't...Yet the Lord is no respecter of persons.

The housemaster answered one of them, “friend [6]...I did not injure you...take what is yours and go… It is My will to do as I wish. Generosity is the Master’s character...to grumble against the King is to speak against the king's mercy...it says give me what I deserve.

The housemaster’s final word is critical. There is no law...it is permissible for Me to do as I wish with what is Mine...or is your eye evil because I am good?

Jesus responds to Peter, “Truly, I say to you, in the new world, [a] when the Son of Man will sit on his glorious throne, you who have followed me will also sit on twelve thrones, judging the twelve tribes of Israel.  And everyone who has left houses or brothers or sisters or father or mother or children or lands, for my name's sake, will receive a hundredfold[b] and will inherit eternal life.  But many who are first will be last, and the last first.” [7]

The Christian faith is not The Kentucky Derby. There is no Win, Place or Show for those who out-prayed, out-witnessed, or out-tithed the others.

Grace is not a performance-based trophy but a God-given gift. The last do indeed receive a first-place prize. And the first receive a last-place prize.  And both prizes are the same: a gold crown placed upon their heads by the One who, for the joy set before Him, ran the race ahead of us all to win for us a trophy of grace delivered in love. [8]