THE PARABLE OF THE LEAVEN 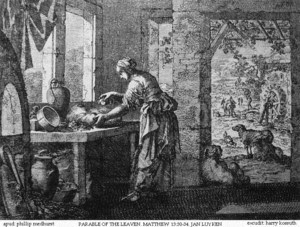 He told them another parable. “The kingdom of heaven is like leaven that a woman took and hid in three measures of flour, till it was all leavened.” Matthew 13:33

Matthew 13:31–35 contains two short, closely-related parables about the kingdom of heaven. One refers to a tiny mustard seed which soon outgrows all the garden plants; it becomes like a tree. The other parable describes the leaven a woman puts in flour to make it grow. Both parables show that the kingdom of heaven will be tiny, at first—with just the disciples. Quickly, though, it will grow into something surprisingly large. Matthew quickly reminds his readers that Jesus taught only in parables at this time, fulfilling yet another prophecy.

This parable is not so much a story as a snapshot of an ordinary event from everyday life. Most people would have seen a woman making bread. That process included adding leaven, usually yeast, to flour. Leaven is a fermenting agent that causes dough to rise over time. Jesus' point with this parable is closely related to the previous parable of the mustard seed (Matthew 13:31–32). Something seemingly tiny and obscure spreads, and grows, until it is something relatively enormous.

Three measures of meal was the amount used by Sarah to bake bread when she and Abram were visited by the LORD and the angels in Genesis 18. It is also the amount used in baking the shewbread for the Temple of the Lord in Israel.

In the Parable of the Leaven, we learn several things about the working of the kingdom in our present age. Each of these lessons stems from the nature of yeast.

First, the kingdom of God may have small beginnings, but it will increase. Yeast is microscopic in size, and only a little is kneaded into the dough. Yet, given time, the yeast will spread through all the dough. In the same way, Jesus’ domain started with twelve men in an obscure corner of Galilee, but it has spread throughout the world. The gospel makes progress.

Second, the kingdom of God exerts its influence from within, not from without. Yeast makes dough rise from within. God first changes the heart of a person, and that internal change has external manifestations. The gospel influence in a culture works the same way: Christians within a culture act as agents of change, slowly transforming that culture from within.

Fourth, although the kingdom of God works invisibly, its effect is evident to all. Yeast does its job slowly, secretly and silently, but no one can deny its effect on bread. The same is true of the work of grace in our hearts.

God is active in the small things, even though His presence may not be evident. Jesus ministry had humble beginnings, but its expansion has been miraculous. God uses even our small efforts to accomplish His purposes.

Lord Jesus, use my feeble testimony to further the growth of Your great kingdom. Amen

[1] Etching by Jan Luyken illustrating the parable, from the Bowyer Bible © wikipedia.org