Proper 29B - Christ the King 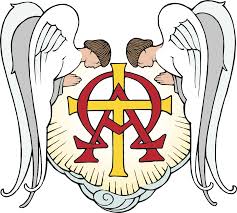 Lord God, heavenly Father, send forth Your Son, we pray, that He may lead home His bride, the Church, that we with all the redeemed may enter into Your eternal kingdom; through Jesus Christ, Your Son, our Lord, who lives and reigns with You and the Holy Spirit, One God, now and forever.

As He stood trial Christ found Himself before Pilate. But Pilate was before Christ as are all people, as Jesus proclaims Himself to be the King of Kings.

A. Not an earthly king.

1. He had no army or other trappings of royalty.

2. When the people wanted to make Him their king, He refused. Jesus, knowing that they intended to come and make him king by force, withdrew again to a mountain by himself. (John 6:15)

B. But He was a King indeed.

2. He was predicted in the Old Testament. Rejoice greatly, O Daughter of Zion! Shout, Daughter of Jerusalem! See, your king comes to you, righteous and having salvation, gentle and riding on a donkey, on a colt, the foal of a donkey. (Zechariah 9:9) For to us a child is born, to us a son is given, and the government will be on his shoulders. And he will be called Wonderful Counselor, Mighty God, Everlasting Father, Prince of Peace. Of the increase of his government and peace there will be no end. He will reign on David’s throne and over his kingdom, establishing and upholding it with justice and righteousness from that time on and forever. The zeal of the LORD Almighty will accomplish this. ( Isaiah 9:6-7)

3. Yet, He was born a King for us. The wise men from the East asked, “Where is the one who has been born king of the Jews? We saw his star in the east and have come to worship him.” (Matthew 2:2) The Word became flesh and made his dwelling among us. We have seen his glory, the glory of the One and Only, who came from the Father, full of grace and truth. ( John 1:14)

b. He came to bear witness to the truth. For I have not come to call the righteous, but sinners. (Matthew 9:35)

c. He came to die for the sins of the world. I am the good shepherd. The good shepherd lays down his life for the sheep.(John 10:11) …and you are to give him the name Jesus, because he will save his people from their sins. ( Matthew 1:21)

d. He came to rise again as conqueror of sin, death, and hell. Where, O death, is your victory? Where, O death is your sting?” The sting of death is sin, and the power of sin is the law. But thanks be to God! He gives us the victory through our Lord Jesus Christ. (1 Corinthians 15:55-57)

Transition: Jesus is King above all kings. To Him has been given a kingdom which shall have no end.

A. The origin of the Kingdom.

1. Planned in eternity through God’s choice of the elect. For those God foreknew he also predestined to be conformed to the likeness of his Son, that he might be the firstborn among many brothers. And those he predestined, he also called; those he called, he also justified; those he justified, he also glorified. (Romans 8:29-30)

2. Planned in Christ Jesus. Husbands, love your wives, just as Christ loved the church and gave himself up for her to make her holy, cleansing her by the washing with water through the word, and to present her to himself as a radiant church, without stain or wrinkle or any other blemish, but holy and blameless. (Ephesians 5:25-27)

B. This Kingdom is worldwide. He said to them, “Go into all the world and preach the good news to all creation. Whoever believes and is baptized will be saved, but whoever does not believe will be condemned. (Mark 16:15-16)

C. The blessings of the Kingdom.

1. Not security from want and war.

2. But the forgiveness of sins and eternal life. But if we walk in the light, as he is in the light, we have fellowship with one another, and the blood of Jesus, his Son, purifies us from all sin. (1 John 1:7)

D. The growth of the Kingdom.

2. But by the proclamation of the truth. Then Jesus came to them and said, “All authority in heaven and on earth has been given to me. Therefore go and make disciples of all nations, baptizing them in the name of the Father and of the Son and of the Holy Spirit, and teaching them to obey everything I have commanded you. And surely I am with you always, to the very end of the age.” (Matthew 28:18-20)

E. The duration of the Kingdom.

2. But Christ’s kingdom is everlasting. The Lord will rescue me from every evil attack and will bring me safely to his heavenly kingdom. To him be glory forever and ever. (2 Timothy 4:18)

F. All who hear His voice are members of the Kingdom. When Jesus spoke again to the people, he said, “I am the light of the world. Whoever follows me will never walk in darkness, but will have the light of life.” (John 8:12)

To the King of kings and Lord of lords be honor and power everlasting.

In the sight of God, who gives life to everything, and of Christ Jesus, who while testifying before Pontius Pilate made the good confession, I charge you to keep this command without spot or blame until the appearing of our Lord Jesus Christ, which God will bring about in his own time—God, the blessed and only Ruler, the King of kings and Lord of lords, who alone is immortal and who lives in unapproachable light, whom no one has seen or can see. To him be honor and might forever. Amen (1 Timothy 6:13-16)