June 6 - Saturday prior to Trinity 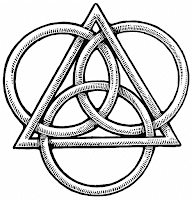 There are few hymns that are addressed to, or focus on, the Holy Spirit. Sunday’s Hymn of the Day, Come, Holy Ghost, Creator Blest (LSB #498), is one such hymn. It is of ancient origin, from at least the eighth century, and generally attributed to the great Frankish scholar and theologian, Rhabanus Maurus (though sometimes Gregory the Great or Charlemagne are given credit). In the Middle Ages, it was one of the best loved and most frequently used invocations of the Holy Spirit, and its singing was accompanied by the use of incense, candles, bells, and rich vestments. The last two stanzas are explicitly Trinitarian, making it ideal for Trinity Sunday: stanza six (like Luther’s explanation to the Third Article of the Creed) affirms that it is the Holy Spirit who teaches us to know the Triune God aright, and stanza seven is a doxology—a hymn of praise to Father, Son, and Holy Spirit.

Rabanus Maurus (c. 776-856) was born of noble parents at Mainz, and educated at Fulda and Tours under Alcuin, who is reputed to have given him the surname, Maurus, after the saint of that name. In 803, he became director of the school at the Benedictine Abbey at Fulda. He was ordained priest in 814, spending the following years in a pilgrimage to Palestine. In 822, he became Abbott at Fulda, retiring in 842. In 847, he became archbishop of Mainz. He died at Winkel on the Rhine, February 4, 856. This distinguished poet-theologian wrote extensive biblical commentaries, the Encyclopaedic De Universo, De Institutione Clericorum, and other works which circulated widely during the Middle Ages. Some of his poems, with English translations, are in Helen Waddell's Mediaeval Latin Lyrics. He is the author of some of the following hymns:

Although his hymns are over 1,000 years old they still remain relevant speaking to our time.

Collect for peace: O God, from whom come all holy desires, all good counsels, and all just works, give to us, Your servants, that peace which the world cannot give, that our hearts may be set to obey Your commandments and also that we, being defended from the fear of our enemies, may live in peace and quietness; through Jesus Christ, Your Son, our Lord, who lives and reigns with you and the Holy Spirit, one God, now and forever.