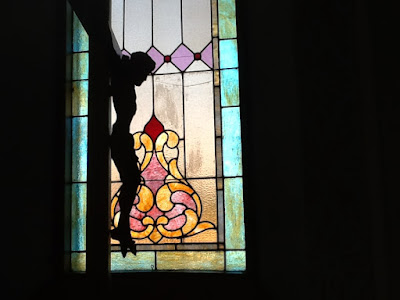 O God, so rule and govern our hearts and minds by Your Holy Spirit that, being ever mindful of the end of all things and Your just judgment, we may be stirred up to holiness of living here and dwell with You forever hereafter; through Jesus Christ, Your Son, our Lord, who lives and reigns with You and the Holy Spirit, One God, now and forever.

Jesus warns the disciples against the scribes, “For in their greed they devour widow’s houses.” By contrast, we see an impoverished widow. Who places two of the smallest coins, worth a penny, into the temple’s treasury.

In the weeks leading up to this morning’s gospel what has Jesus encountered?

We have learned that…Our Lord condemns – The scribes and Pharisees. For their hypocrisy. By their traditions, they had destroyed the commandment, which requires children to honor their father and mother, teaching them to find excuse from helping their parents. “For in their greed they devour widow’s houses.”

The Law of Moses required His people to “honor” their parents. That term “honor” did not suggest mere “lip service”; it included the idea of caring for them in their various needs. However, they had concocted a scheme to avoid this specific responsibility.

Jesus takes issues with the religious elitists and their false and petty piety - specifically concerning the care of parents - when He says, “You neatly reject the commandment of God in order to set up your tradition. Mark 7:10 For Moses said, ‘Honor your father and your mother,’ and, ‘Whoever insults his father or mother must be put to death.’ 11 But you say that if anyone tells his father or mother, ‘Whatever help you would have received from me is now corban’ (that is, a gift for God), 12 then you no longer permit him to do anything for his father or mother. 13 Thus you nullify the word of God by your tradition that you have handed down. And you do many things like this.” (Vv.9-13)

Notice what is happening here. Jesus lists the commandments from #5-10 and circles back to #4. Reason why? The man was defrauding his parents.

And he said to him, “Teacher, all these I have kept from my youth.”

And Jesus, looking at him, loved him, and said to him, “You lack one thing: go, sell all that you have and give to the poor, and you will have treasure in heaven; and come, follow me.” Disheartened by the saying, he went away sorrowful, for he had great possessions.   All he had to do was sell what he had to honor and provide for his family. Yet he walked disheartened and sorrowful because of his wealth. Wealth he had received on the backs of his parents.

Jesus is sitting across from the offering boxes. He observes the gifts being given. He calls attention to the widow’s penny. In contrast to the million-dollar gifts offered by the rich. He claims that she gave more than any other. She gave the most. Because she gave out of her poverty. While others gave out of their abundance.

The heroine is an unnamed widow. She needed the money more than the temple or the priests. It would be expected that those who have should give. But those who have nothing – would not be expected to give. But here is a woman. Whose total wealth - are two tiny coins. Her net worth – a penny! Jesus singles her out. She is the example for us.

This widow. Is singled out. She had given more than all the rich put together. She gave her whole living. She gave everything! She gave. ALL!

A widow was almost always poor. Because she had no husband to support her. There were no insurance policies. No death benefits plan. No Social Security.

This impoverished widow. Why was she poor? Back then. Most were poor. The widows were even more destitute and deprived – of property and possessions. Impoverished and insolvent. Overdrawn and in debt. She was broke and bankrupt. And, it could very well be. She found herself in this horrible condition. At the hands of her own children.

The widow gave voluntarily all that she had. She had very little – “two mites” (KJV), “two very small copper coins, worth on a fraction of a penny” (NIV) What she gave equaled to 1/64 of a Denarius– A Denarius was one day’s pay.

Let’s do the math in today’s dollars and cents.

According to a Money Magazine article dated March 15, 2018 we find that…

Now she had nothing. Nothing left except for two coins worth $3.15 each. She trusted she would be taken care of.  Even though the institution in which she was affiliated was wicked; corrupt crooked criminal.

She gave everything –They all gave out of their wealth; but she, out of her poverty, put in everything—all she had to live on.  She had given more than all the rich people put together because she had given her whole living. Now she had nothing left! Yet, Jesus knew she would be taken care of by God, in whom she trusted. For this reason her faith is counted as great! It was not the amount of the widow’s gift but the attitude in which she gave. She gave as the Savior gave of Himself.

Jesus is present where His word is taught and preached. Jesus is present where the Sacraments administered. When hymns are sung. And prayers said. But He is also present where money is given for the work of His kingdom.  Such giving is holy. An activity that Jesus willingly observes. He observed that many gave much. This poor widow - gave the most!

During difficult times. Especially in times of hardship. You need to remember Christ’s presence and power to save. The Savior still calls us to be witnesses for Him in this world for He uses you to be His ambassador of peace and good will. As we gather to worship, to pray, to meet the Savior as He comes to us through His means of grace His message of life and salvation will encourage, strengthen and comfort you.

Jesus does all the work, as He points us to the place where our salvation was won; at a cross and empty tomb. The Father is the one who lifts us up to Himself through His mercy and grace. All He asks of us is to place our faith and confidence in Him and to trust Him to do the work He has promised to do.

Jesus moves you to voluntary sacrifice. By reminding you, that He willingly gave His all. His vey life for yours. He left heaven's glory. He became poor for you. He freely bestowed on you forgiveness. And clothed you in His righteousness. By renewing your minds through Word and Spirit so that you give first yourself and then your money, as thank offerings to Him. [1] By pointing you to His ample provision of all your needs. [2]

Jesus is not dependent on your gifts. Yet He has arranged to carry out His church's work through people just like you. He encourages you to serve your neighbor joyfully.

Jesus sees everything. He sees how much you give.  And your giving is not limited to cash. He sees how you invest your time. He sees how you use your talents. He sees how you employ your gifts. He knows what you value. He sees how you care for others. This widow still serves as an example for us. She gave in faithful response to the only one who would provide – when all had abandoned her – there she was – serving with all that she had.

O divine Master, grant that I may not so much seek
To be consoled as to console,
To be understood as to understand,
To be loved as to love.
For it is in giving that we receive,
It is in pardoning that we are pardoned,
And it is in dying that we are born to eternal life.
Amen.[3]