Thursday prior to Epiphany 1 - The Baptism of our Lord 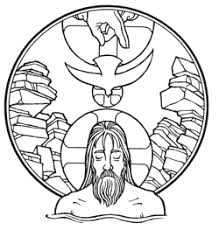 Romans 6:1-11 -Your baptism is a birth certificate; your baptism is a death certificate. In baptism you died to sin and became alive to God. When we come to the Father in repentance and faith, our old Adam, that is, our old sinful nature is drowned and killed while a new man becomes alive in us to live before God in righteousness and purity. Each day is a death to self and a new life to God. The words of John the Baptist are a fitting refrain, “He must increase I must decrease” (John 3:30).

This section of Romans 6 contains 3 very powerful analogies to help us understand our walk with Christ. Remember from chapter 5 that Paul is arguing that although grace exceeds sin (Romans 5:20) we must avoid sin if we intend to claim that we belong to Christ (Romans 6:1-2).

Now Paul offers three key comparisons to help us understand what he means. The Christian has become one with Christ or “united” with him. We will examine each of these comparisons and see just how important each on really is. Remember, Paul’s goal is to teach us about being with Christ and joining with him in death.

Here are the analogies:

Christ Died - We Die to Sin

Paul’s purpose is stated in Romans 6:2, “How can we who died to sin live any longer therein?” The Christian is dead as far as sin is concerned. Just as a King or Ruler cannot rule over a dead man and cannot compel him to do anything, sin no longer has power over the Christian. He makes this very plain in Romans 6:7 when he writes “For one who has died has been set free from sin.” Consider also, Colossians 3:3 and Peter’s thoughts at 1 Peter 2:24. Dying is essential to the Christian life.

Christ was Buried – We are Buried in Baptism

Paul says that the disciple has been “baptized into his death” (Romans 6:3). Then in the very next verse he continues by saying that “we were buried therefore with him by baptism into death…” It would seem that this is an important comparison for Paul. Just as Jesus was buried in a tomb we are buried with him in baptism.

To give greater emphasis here Paul writes that we are “buried therefore with him by baptism into death , in order that just as Christ was raised from the dead by the glory of the Father we too might walk in newness of life” (Romans 6:4,). We are baptized in order that we might be raised!

Christ was Raised – We too shall rise

Here are two ways in which the Christian is resurrected. Immediately the Christian is raised from the water of baptism to “walk in newness of life” (Romans 6:4). In 2 Corinthians 5:17 we are declared a “new creation.” The Galatians were told that the Christian was no longer living in his old ways but now Christ was living in them (Galatians 2:20). Paul, later in Romans, calls on believers to be a “transformed” people (Romans 12:2). In fact, the very example of Paul is of a man totally and completely changed after his conversion in Acts 9. So when Paul here speaks of being raised his immediate thought is of one who arises from baptism to a different way of life.

But there is a second, grander, sense in which Paul speaks. Those who have joined with Christ in his death will be raised like Christ for an eternity!

This idea of a resurrection to eternity is scattered throughout the New Testament, but 1 Corinthians 15 is probably the key chapter on the subject. The resurrection of Jesus and its meaning for us cannot be overstated. Paul says it this way: “And if Christ has not been raised, four faith is futile and you are still in your sins” (1 Corinthians 15:17).

1 Corinthians 15 is one of the greatest chapters of the Bible. The gist of the chapter is that Christ has been raised from the dead and, as a result, we too can expect a resurrection and eternal life. It’s a thrilling thought to consider that there is far more ahead for the Christian than this brief troublesome stay in the flesh.[2]

Collect for the Epiphany or our Lord – O God, by the leading of a star You once made known to all nations Your only-begotten Son; now lead us, who know You by faith, to know in heaven the fullness of Your divine goodness; through Jesus Christ our Lord, who lives and reigns with You and the Holy Spirit, One God, now and forever. [3]– 06 January 2022