Saturday prior to Epiphany 2 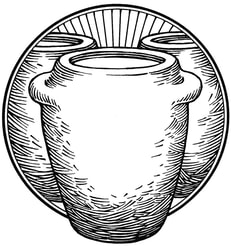 Matthew 2:1-12; Ephesians 1:9; John 18:26-27; John 1:29 - Sunday’s hymn of the day is The Star Proclaims the King Is Here (399 LSB). This is yet another wonderful Epiphany hymn. Despite outward conditions, nothing will change concerning God’s dealings with His people. As the Wise Men were directed to find the infant Lord Jesus, so to this day the Lord will make His presence known to you as He comes through His means of grace. This is how He chooses to communicate to you – in tangible ways. Not in myth, not in the spectacular or the supernatural but through simple means. Wise men still seek Him. Look for Him in those places He has promised He will be found.

Why is Epiphany important? First, the word “Epiphany” itself reminds us of what Christmas is about. On Christmas Eve God announced to the shepherds, an epiphany, that the One whom God promised would “crush the serpent’s head” was born (Genesis 3:15). God did not abandon His people but planned for a Savior to come and He did. As the Son of God and son of man, Jesus defeated the devil on the cross, “(It is finished.” John 19:30). He rose victorious after three days and now gives eternal life to all who believe in Him.

Secondly, the historic reading for Epiphany, Matthew 2 (which is the coming of the Magi to worship the King of the Jews) reminds us that salvation is for all people. We Gentiles were the wild olive shoot, and God in His mercy grafted us to His fruitful and beloved olive tree (Romans 11). What a blessing to us!

Finally, Epiphany reminds us that there are others whom God wants to come and worship the One who was promised to Adam and Eve. Epiphany should spur us on in proclaiming God’s saving acts. [2]

An Epiphany Prayer: O God, by the leading of a star you manifested your only Son to the peoples of the earth: Lead us, who know you now by faith, to your presence, where we may see your glory face to face; through Jesus Christ our Lord, who lives and reigns with you and the Holy Spirit, one God, now and forever. Amen. [3]-15 January 2022
[1] Wedding at Cana, copyright © Ed Riojas, Higher Things
[2] Pr. Michael Strong, https://enquirerdemocrat.com/star-proclaims-king/
[3] Collect for Epiphany, Lutheran Service Book © 2006 Concordia Publishing House, St, Louis
Posted by Pastor D at 9:00 PM