Saturday prior to Epiphany 5 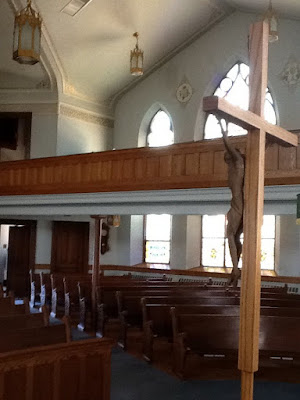 The hymn of the day, Hail to the Lord’s Anointed (LSB 398), is a fitting hymn of praise to the Son of God made flesh and anointed at His Baptism. Especially in stanza 2, it recounts His coming to heal those beset by the consequence of sin in the world. But more than providing just physical relief, He comes that their darkness turn to light, to relieve us from the eternal consequences of sin.

Hail to the Lord's anointed, great David's greater Son!
Hail in the time appointed, His reign on earth begun!
He comes in succor speedy to those who suffer wrong,
To help the poor and needy, and bid the weak be strong.
To give them songs for sighing, their darkness turn to light,
Whose souls, condemned and dying, are precious in His sight.

James Montgomery (1771-1854) followed in the footsteps of two poetic luminaries—Isaac Watts and Charles Wesley. In many hymnals he is well represented, third only to Watts and Wesley for British hymn writers before 1850.

Hymnologist Albert Bailey notes that “One cannot call him a great poet, but he knew how to express with sincerity, fervor, simplicity and beauty the emotions and aspirations of the common Christian.”

Montgomery’s father was a minister, and his parents later served as missionaries to the West Indies. James remained in Yorkshire and was raised from age 6 in a boy’s boarding school administered by the Brethren of Fulneck. Montgomery later said, “There, whatever we did was done in the name and for the sake of Jesus Christ, whom we were taught to regard in the amiable and endearing light of a friend and brother.”

He began writing poetry at age 10, inspired by the hymn of the Moravians, the same group that inspired John Wesley. Despite flunking out of school at age 14, Montgomery found a job in 1792 at a radical weekly newspaper, the Sheffield Register.

He assumed the leadership of the paper not long after, when the previous editor fled the country fearing persecution for his politics.

At this point, Montgomery changed the name of the paper to the Iris, and served for 31 years as editor, during which he was a tireless supporter of social justice. He was jailed twice for his radical views, using the time in prison to write poetry.

This hymn was originally an eight-stanza poem, a paraphrase of Psalm 72 written in 1821 for a Christmas leaflet, “Moravian Ode.”[1]

Collect for Epiphany 5: O Lord, keep Your family the Church continually in the true faith that, relying on the hope of Your heavenly grace, we may ever be defended by Your mighty power; through Jesus Christ, Your Son, our Lord, who lives and reigns with You and the Holy Spirit, one God, now and forever. Amen.[2]