Lent 1
February 21 2021
Mark 1:9-15
The Temptation of Jesus
The message of the cross leads to the Testing of Faith

As we begin the discipline of Lent we will consider the following theme during the next six weeks “The Way of the Cross.” This morning we will find that the way of the cross leads to the testing of faith.

The whole account of Jesus’ temptation is given in two short verses. They tell us the basics about temptation. These few verses explain what you should know concerning temptation–

It is God allowed - “The Spirit immediately drove Him” 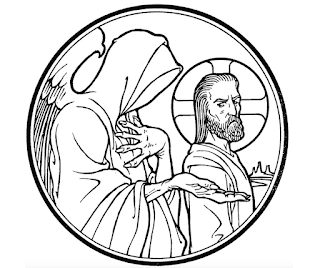 Jesus had just been baptized and received the Spirit who came down upon Him like a dove. The Spirit immediately drives Him into the wilderness where He is tempted. The Spirit is always given when a call has been issued to do a task. At His baptism Jesus was ordained to be the Savior of the world.

The Spirit in a sense of urgency – “immediately drove” – takes Jesus into a wilderness where He will have solitude to think through the method He will use to accomplish the task. He is tempted to take the devil’s way.

The Father allows temptation to come. But always with limits. Jesus was tempted for 40 days. Job was tested. But with limits. Job lost his children, his wealth, his property but not his health. He kept his wife.  And when he was then afflicted with sickness God spared his life.

Jesus reminds Peter, “Simon, Simon, Satan has asked to sift each of you like wheat. But I have prayed for you, Simon that your faith will not fail. And when you have turned back, strengthen your brothers.” Luke 22:31-32 Sometimes we endure temptation so in the future we may help others when they face temptation.

It is Satan conducted – “Tempted by Satan”

Mark would remind us that Jesus is tested πειραζόμενος.  For forty days Jesus was tested by Satan before He began His ministry. When we are tempted our faith is tested. Mark explains that Jesus was “tempted by Satan.”

Some think God tempts us because we pray in the Lord’s Prayer; “lead us not into temptation.” This is impossible. For God desires us to do only what is right and good.

God indeed tempts no one. Yet we pray that God would guard and keep us. So that the devil, the world and our sinful nature may not deceive us or mislead us into false belief, despair, and other great shame and vice. Although we are attacked y these things, we pray that we may finally overcome them and win the victory.

Some think temptation is a sin. Not so. Yielding to temptation is sin. Yet, every Christian is tempted.  As was Jesus. The Savior warns us, “For it is necessary (ἀνάγκη) that temptations come.” - (Matthew 18:7)

St. Paul strongly warns of the coming temptation and its serious consequences.  “Now the Spirit expressly says that in later times some will depart from the faith by devoting themselves to deceitful spirits and teachings of demons.”[1] “But even if we or an angel from heaven should preach a gospel contrary to the one we preached to you, let him be under a divine curse! (ἀνάθεμα) As we have said before, so now I say again: If anyone is preaching to you a gospel contrary to the one you embraced, let him be cursed! (ἀνάθεμα)[2]

It is danger saturated – “He was with wild beasts” 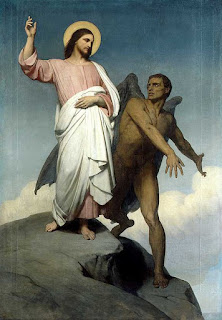 Many hold the opinion that the better Christian you are the less temptation you have. The opposite is the case: The better you are, the more you are tempted. Temptation is a trying time. Requiring a spiritual struggle. It is a wilderness experience. In which one fights with wild beasts.

So what are the beasts with which you must do battle? Says St. Paul, “The acts of the flesh are obvious: impurity, and debauchery; idolatry and sorcery ;( 1st Table of the Law) sexual immorality, hatred, discord, jealousy, and rage; rivalries, divisions, factions, and envy.” (2nd Table of the Law) - (Galatians 5:19-20)

They are called beasts for a reason. They are fierce monsters. With which you must contend. Satan wants to destroy you. But the victory is yours in Christ Jesus.

It is angel ministering – “Angels ministered to Him”

Where are the angels according to Mark?  They are with Jesus throughout His tempting. Mark uses the word “ministered.” (And for those of you who are grammar geeks, Mark writs in the imperfect tense to remind us that a prolonged or continued action took place.)

Although the Spirit drives us to a place of testing. And although God does not tempt us. God does not leave us alone. To resist the devil by ourselves! His angels, His messengers, continually support and comfort us in our trials. “Are they not all ministering spirits sent out to serve for the sake of those who are to inherit salvation?” – (Hebrews 1:14)

Paul assures us that God will not permit us to be tempted above what we are able to resist. “No temptation πειρασμὸς has overtaken you except what is common to man. And God is faithful; He will not let you be tested beyond what you can bear. But when you are tested He will also provide a way out so that you can endure it”. - (1 Corinthians 10:13)

In fact He’s promised to walk with you through the darkest night and the most trying of tests. “For I am convinced that neither death nor life, neither angels nor demons, neither the present nor the future, nor any powers, neither height nor depth, nor anything else in all creation, will be able to separate us from the love of God that is in Christ Jesus our Lord”. – (Romans 8:38-39)

The Way of the Cross leads to the Testing of Faith. Only Christ alone can sustain that faith. Will you go it alone? Or will you walk with Him during this Lenten pilgrimage? How you answer this question will determine how you will fare.