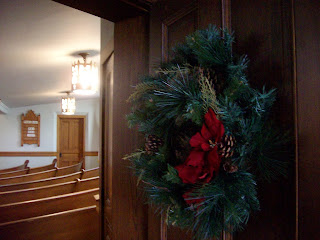 Introduction: Christmas is a costly even for many Americans. To buy gifts, they go into debt with is not paid off for months. Though Christmas may be costly to us, think of the cost to God. Jesus was a precious gift. It cost God His all while for us it only costs money!

Consider the high cost of Christmas –

At the time this prophecy was given originally it was spoken to king Ahaz as a sign not only that the Lord was with him but as a testimony that the Lord Himself would rescue king Ahaz from all of his enemies – even those who threatened to take his life.

The Lord who directed all of the affairs of His people sent His own Son into the world as the final fulfillment of all prophecy, for it was “God with us” in the fullest sense who came to be our substitute, to bear our sin, to die a death that we deserved.

Says the Psalmist, “O LORD, you have searched me and you know me. You know when I sit and when I rise; you perceive my thoughts from afar. You discern my going out and my lying down; you are familiar with all my ways. Before a word is on my tongue you know it completely, O LORD.  My frame was not hidden from you when I was made in the secret place. When I was woven together…your eyes saw my unformed body. All the days ordained for me were written in your book before one of them came to be.”[1]

Even before your parents knew you existed your heavenly Father knew all about you.  Your life is like a novel and the Father’s handwriting is on every page. The Lord knows your yesterdays and is planning your tomorrows. That’s how concerned He is with you.

Transition: How much did cost the Father at Christmas? It cost Him Himself. It cost Him humility.

II.     Cost humility – born of a virgin –V. 18 “This is how the birth of Jesus Christ came about. His mother Mary was pledged to be married to Joseph. But before they came together she was found to be with child through the Holy Spirit.”

There was no physical union during the Jewish period of engagement but it was a much more binding relationship then a modern engagement and could be broken only by a certificate of divorce. Although they were “pledged to be married” Matthew uses the terms “husband” and “wife” of Mary and Joseph before they were married. Finding his fiancée pregnant, Joseph, being a righteous man, planned to divorce Mary quietly. However, in a dream an angel explained to Joseph that Mary’s child was conceived by the Holy Spirit.

Before her marriage to Joseph, Mary was “found” to be with child. In Mary’s day, it was a bombshell! It meant a divorce by the betrothed resulting in public shame and disgrace. The family of the girl would lose face in the community. The adulteress could have been stoned to death. It took an angel’s visit to get Joseph to accept a pregnant bride. In light of this, we must appreciate and admire the courage and devotion of Mary in consenting to be the mother of Christ. She took God at His word. He didn’t hesitate in becoming the Lord’s handmaiden. In humble obedience she submitted to the Father’s will.

This Jesus would do by saving them... From the GUILT of sin.

By offering His blood as the atonement for their sins - But God demonstrates his own love for us in this: While we were still sinners, Christ died for us.  Since we have now been justified by his blood, how much more shall we be saved from God’s wrath through him!  Romans 5:8-9

When one is washed by the blood of Jesus, He truly is their Savior. All of their sins, all of their transgressions, all of the faults and failings are forgiven and gone.

From the POWER of sin -

By sending His sanctifying Spirit to help His people break sin's dominion. Without the Holy Spirit in your life it is impossible to please Him. But with His Spirit active and alive in you He is able to accomplish all that He desires for your.  You, dear children, are from God and have overcome them, because the one who is in you is greater than the one who is in the world. 1 John 4:4

Paul writes of this in Romans 8.  “Therefore, there is now no condemnation for those who are in Christ Jesus, Therefore, brothers, we have an obligation—but it is not to the sinful nature, to live according to it.  For if you live according to the sinful nature, you will die; but if by the Spirit you put to death the misdeeds of the body, you will live, because those who are led by the Spirit of God are sons of God.”  Vv.1,12-14

From the CONSEQUENCE of sin -

From the wrath of God to come on the last day.

Since we have now been justified by his blood, how much more shall we be saved from God’s wrath through him! - Romans 5:9;

“Wait for his Son from heaven, whom he raised from the dead—Jesus, who rescues us from the coming wrath.”  1 Thessalonians 1:9-10

Ultimately, from the PRESENCE of sin -

When we depart to "be with the Lord" whether it is on the last day when He comes in glory or when He takes us by the hand and calls us individually to be with Him in glory.

“After this I looked and there before me was a great multitude that no one could count, from every nation, tribe, people and language, standing before the throne and in front of the Lamb.  They were wearing white robes and were holding    palm branches in their hands. And they cried out in a loud voice:  “Salvation belongs to our God, who sits on the throne, and to the Lamb.”  Revelation 7:9-10

Conclusion: How much did it cost the Father at Christmas? It cost Him everything – yet it was priceless.  For in doing so He has won the world and redeemed everything in it.