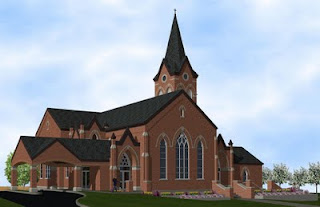 Proper 10 (10–16 July)
Blessed Lord, since You have caused all Holy Scriptures to be written for our learning, grant that we may so hear them, read, mark, learn, and inwardly digest them that we may embrace and ever hold fast the blessed hope of everlasting life; through Jesus Christ, Your Son, our Lord, who lives and reigns with You and the Holy Spirit, one God, now and forever.

The Word works as it produces a crop many times what was sown. Crowds but not necessarily Christians. Matthew 13:1-8

Crowds came to hear Jesus. But not all became believers. They may have enjoyed His message. They probably went away impressed with His wisdom and authority, but they did not follow Him. To deal with this problem, Jesus tells the parable of the sower. Only one-fourth of the people produced results.

The parables of Jesus are directed at the heart. The question cannot be avoided. What kind of hearer are you? The parable is an answer to the question why there are different responses to the preaching of the Word. The emphasis is not on the threefold response by the good soil. The problem is with neither the seed nor the sower. It is a problem of the soils and their response to the seed. It concerns the people’s part in preaching and the art of listening.

Jesus tells us that one of four things can happen to the seed that is sown. The devil will steal it, (2) some will fall into places where it cannot take root, (3) some will become fodder for weeds, and (4) some will take root and produce an abundant harvest.

1. Fly-by-night hearer — v. 4. As he was scattering the seed, some fell along the path, and the birds came and ate it up. When anyone hears the message about the kingdom and does not understand it, the evil one comes and snatches away what was sown in his heart. This is the seed sown along the path. 19

The birds that came and picked up the seed by the wayside represent the fly-by night hearer. The gospel is preached to people hardened in sin. It makes no impression. It lies like seed on the "hard path." It is easily taken away. It never takes root. The fly-by night hearer is the wayside hearer; the light, flippant, indifferent hearer upon whom no impression is made.

2. Fair weather hearer — Vv. 5-6. Some fell on rocky places, where it did not have much soil. It sprang up quickly, because the soil was shallow. But when the sun came up, the plants were scorched, and they withered because they had no root. The one who received the seed that fell on rocky places is the man who hears the word and at once receives it with joy. 21But since he has no root, he lasts only a short time. When trouble or persecution comes because of the word, he quickly falls away. VV.20-2

The stony hearer; the heart that exhibits a momentary feeling at the appeal of the gospel; but no permanent impression is made. He is offended at the cross. He shrinks back from it. He does not care to take up his cross, and follow Christ. He drops his religion, and the profession of it. He becomes apostate, falls away, and comes to nothing. His endurance is temporary. He is a creature of circumstances, changing as they change. His focus is on things temporal. With this explanation, the Savior reminds us that his faith last but a little time.

3. Too busy hearer — v. 7. Other seed fell among thorns, which grew up and choked the plants. V.22 The one who received the seed that fell among the thorns is the man who hears the word, but the worries of this life and the deceitfulness of wealth choke it, making it unfruitful.

The thorny soil is the heart that takes in the Word, but is so full of worldly cares that these presently gain the upper hand. This describes the world-serving hearer. “He also that received seed among the thorns” - These represent the cares, the anxieties, and the deceitful lure of riches, or the way in which a desire to be rich deceives people. How many more might reach heaven, if it were not for this deep-seated love of that which fills the mind with care, deceives the soul, and finally leaves it naked, and guilty, and lost! Beware of the deceitfulness of riches - which promise peace and pleasure, but can never give them. The deceitfulness of riches does the mischief. Riches cannot deceive us unless we put our trust in them, then they choke the good seed.

What distinguished the good ground was fruitfulness. The good soil is the good and honest heart; the heart that receives and retains the truth. In such a heart, the seed will grow and the new life will be abundant. Those whose hearts are prepared by grace receive it honestly, and are given full opportunity to grow.

“In a rich and mellow soil - in a heart that submits itself to the full influence of truth, unchecked by cares and anxieties; under the showers and summer suns of divine grace; with the heart spread open, like a broad, lush field, to the rays of the morning and to evening dews, the gospel takes deep root and grows.” [1] Matthew Henry’s Commentary Matthew 13:22


The sense of hearing cannot be better employed than in hearing God's sacred word. Let us look to ourselves that we may know what sort of hearers we are. What distinguished the good ground is fruitfulness. By this mark of fruitfulness, Christians are distinguished from hypocrites. Christ does not say that this good ground has no stones in it, or no thorns grow in it. Yet nothing hinders fruitfulness. Not all are alike. We should all aim to bring forth most fruit.