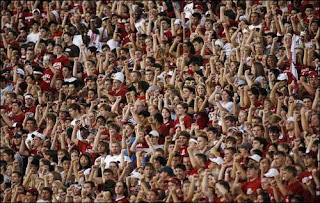 According to the concessions manager the following items were sold at the Indiana Vs Wisconsin game, on Saturday, March 12, 1994 (per my telephone conversation with him on March 15, 1994)...

This game was played on an afternoon with tipoff scheduled for 2:00 pm Most fans had eaten their breakfast and had probably had their lunch also! And fans had to pay for their food! Jesus feeds the crowd freely, without cost!

When we pray "give us this day our daily bread" we can know that the Savior will supply us with all that we need to support our body and life!
Posted by Pastor D at 12:01 AM