In the battle between Christ and Satan who won? Mark tells us that Jesus had a desert showdown with the enemy but gives no details and does not say who won! Of course, the outcome is implicit throughout Mark’s gospel, especially in Mark 3:27, where Jesus utters a phrase that sums up the theme of this day that Lent is an attitude of testing in which by God’s grace working in our lives we enter victorious. Jesus says, “In fact, no one can enter a strong man’s house and carry off his possessions unless he first ties up the strong man. Then he can rob his house”. When He was confronted by temptation, Jesus emerged victorious.

I. Jesus is the Victor over temptation Mark 1:12-13 tells us “And immediately the Spirit impelled Him {to go} out into the wilderness. And He was in the wilderness forty days being tempted by Satan; and He was with the wild beasts, and the angels were ministering to Him.“

A. We sinners are not and never will be victorious without Him.

1. In our own experience.
a. When we are tempted, we play around with sin for a while instead of offering immediate resistance.
b. Soon we find ourselves taking short cuts around God’s will. We do not do what we want (Romans 7:15-20)

2. In the struggle between Satan and God.
a. The stakes are much higher than a few moral or immoral acts. Satan wants us. He is the enemy.
b. Lurking behind every temptation is the temptation of unbelief. When we do not believe, Satan has us.

B. Jesus was the Victor from the very beginning of His ministry.

3. He put Satan in his place. From 1:13 on, Jesus was clearly in charge of every encounter He had with the demonic, just as He had the last word over His own death (Mark 16:6-7).

Transition: Like the new supervisor who seizes attention by firing two workers in his first month, Jesus let Satan know right away that He was in charge! But He exercises His subsequent rule not by mere force but by His work of grace.

A. He preaches the Gospel (v.14): “And after John had been taken into custody, Jesus came into Galilee, preaching the gospel of God,”

2. In the Gospel, Christ brings His Satan-defeating power to people. It is the “one little word” that can fell and destroy the Devil.

B His message (v.15): “and saying, "The time is fulfilled, and the kingdom of God is at hand; repent and believe in the gospel."

1. The kairos is fulfilled. After the era of Messianic expectation, He is finally on the scene to bind Satan.

2. The kingdom of God is near-because Jesus and the Gospel are near. He snatches us away from Satan’s rule (see Large Catechism III 51-56; also LC II 27, 31)

3. Repent and believe the Gospel – {durative}, for turning from sin to forgiveness is the heartbeat of an ongoing relationship with Jesus Christ (see Romans 8:31-39)

People are easily led. Walk into a room full of strangers and announce that you are in charge – it’s amazing how far you can get. But Jesus, the Victor over temptation is truly in charge, as opposed to Satan and all human thought. His gospel is not an empty claim. It extends His work to us and makes us His. To the Victor belongs the spoils! Over sin, over Satan, over temptation. 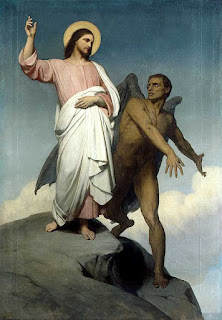