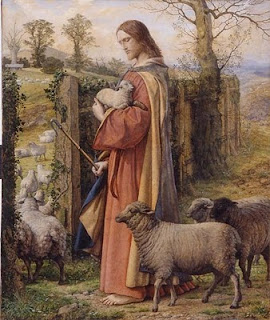 This coming Sunday is Good Shepherd Sunday. It is appropriate for us to spend a little time in the Good Shepherd chapter of the Bible – John, chapter ten. The Gospel lesson is the first of the Easter gospels not to deal with the resurrection appearance of Christ.

Is He the same person as Jesus of Nazareth was? Has the resurrection made any difference in Him? Who is this glorified Jesus? Jesus tells us who He is – a divine shepherd, one with God, who know, keeps and gives eternal life to His sheep.

Our very lives depend on knowing who Jesus really is. If the people who asked on Palm Sunday about Jesus, “who is this?” had know who He really was, they could not have rejected Him. If Pilate had known, he would not have sentenced Him to death. If the religious leaders had known, they would not have plotted His death, for Jesus prayed, “They know not what they do.” At the well, Jesus said to the woman, “If you knew who it was who asked you for a drink, you would have asked Him for living water.” How is it that some recognized Jesus as the Christ? Men such as Simeon and John the Baptizer saw and believed. Others did not – men such as Philip, the disciples on the Emmaus road, Pilate and the Pharisees. How many today would recognize Jesus is they saw Him? What people do for the church depends ultimately on the degree of realizing who He is.

These words of the Savior bring the problem to us by telling of the Pharisees who directly challenged Jesus. They say, “If you are the Christ, tell us plainly.” So, how do you know that Jesus is real?

1. From His words – “I told you.” Vs. 25a
A. In His conversation with Nicodemus –a Pharisee- Jesus said, “I tell you the truth, no one can see the kingdom of God unless he is born again.” 3:3
B. To the Samaritan woman at the well, He clearly revealed Himself to her as the Savior when He said, “I who speak to you am He.” 4:26
C. He had clearly taught them when He said, “For just as the Father raises the dead and gives them life, even so the Son gives life to whom He is pleased to give it.” 5:21

2. From His works – “The works bear witness to Me.” Vs. 25b
A. The works Jesus did were those deliberate acts in which He demonstrated that He was the Savior of the world.
1. When He fed the five thousand. John 6
2. When He healed the man born blind. John 9
3. When He raised Lazarus back to life. John 11
B. His ultimate work was His work of salvation.
1. When He suffered for you and for me.
2. When He was crucified under Pilate.
3. When He died on the bloody cross and cried out “It is finished!” 19:30

Transition: We know Jesus to be real by what He said and by what He did. He is also known by those who know Him too.

3. His workers [Sheep] – “You do not believe because you do not belong to My sheep.” V.26
A. These did not belong, nor did they believe because they rejected Him.
1. He was not the teacher they were searching for.
2. He associated with those for whom the considered the “dirties” of this world.
3. He came for those who knew they were sick and were in need of a physician.
B. You too believe?
1. Then you are a part of His family.
2. You have been given this new life.
3. You too can be used of Him to tell His story in this world.

Your good shepherd speaks clearly and calmly to you this night. You are a sheep of His fold, a lamb of His flock, a sinner of His own redeeming How good it is to know that you are connected to the Savior, Jesus your true and good shepherd.

Image of the Good Shepherd (Wm. Dyce) found here: http://www.biblical-art.com/biblicalsubject.asp?id_biblicalsubject=789&pagenum=1
Posted by Pastor D at 12:30 AM