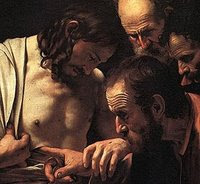 Enough! Thomas had had enough of this secrecy. James and John had met with Jesus - in secret - asking to be seated at His left and his right. The Council had met - in secret - to obtain an arrest and a conviction. They had met - in secret - with Pilate to secure the tomb. And now, after all this, his so called friends had come up with this fabricated story - of Jesus magically appearing before them. “I don’t buy it! I don’t believe it. Unless I see with my eyes the marks of How wounds and place my finger in his hands and my hands at His side I will not believe it!”

1. Like Thomas we do not have an eye-witness experience of the risen Christ.
A. Thomas was not present.
1. Possibly he was distracted involving his time in some other activity so he wouldn’t have to concentrate on the present reality – an empty tome and no body.
2. Possibly he had give up and checked out. Why remain with the other disciples? Jesus was dead. What more could be said?
B. For us the resurrection happened some 2,000 years ago.
1. We do not have the experience of seeing Jesus with our own eyes.
2. Can you have faith without witnessing Jesus Christ alive from the dead?

Transition: Like Thomas we have not personally witnessed Jesus Christ alive from the dead. The Easter proclamation is powerful beyond comprehension.

2. The message of the Resurrection is incomprehensible.
A. Dead men do NOT come back to life again.
1. Thomas had been there. He personally witnessed the crown of thorns, the nails, the spear. He new Jesus had died.
2. He had witnessed Jesus’ burial. He knew of the safeguards the Elders had arranged with Pilate; a tomb sealed and the guard which was posted.
B. If Jesus were alive He would have to appear before him just as He had to the rest of the disciples.
1. He would have to witness the marks of Jesus’ Passion.
2. These scars and visible marks on Jesus’ body would let him know that the same Jesus who had died by crucifixion was in fact alive. A counterfeit Jesus would not do.
C. What convincing proof does this world need to believe in the resurrection?
1. The claim is still true today 2,000 years later – dead men do not rise.
2. We trust in the same testimony of those eyewitnesses. John in his first epistle would later write, What was from the beginning, what we have heard, what we have seen with our eyes, what we have looked at and touched with our hands, concerning the Word of Life-- 1 John 1:1

Transition: Thomas’ life was latterly changed once he became an eyewitness of Jesus bodily raised from the dead.

The Savior’s words to Thomas are meant for you this day. “Blessed are those who believe even though they have not seen! Lord, grant us such a faith as this!

St. Thomas the Apostle found at:http://upload.wikimedia.org/wikipedia/en/c/cc/Caravaggio_incredulity.jpg
Posted by Pastor D at 12:07 AM