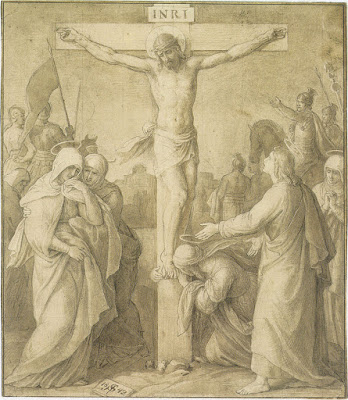 Betrayal and Arrest of Jesus

18 When Jesus had spoken these words, he went out with his disciples across the brook Kidron, where there was a garden, which he and his disciples entered. 2 Now Judas, who betrayed him, also knew the place, for Jesus often met there with his disciples. 3 So Judas, having procured a band of soldiers and some officers from the chief priests and the Pharisees, went there with lanterns and torches and weapons. 4 Then Jesus, knowing all that would happen to him, came forward and said to them, “Whom do you seek?” 5 They answered him, “Jesus of Nazareth.” Jesus said to them, “I am he.”[a] Judas, who betrayed him, was standing with them. 6 When Jesus[b] said to them, “I am he,” they drew back and fell to the ground. 7 So he asked them again, “Whom do you seek?” And they said, “Jesus of Nazareth.” 8 Jesus answered, “I told you that I am he. So, if you seek me, let these men go.” 9 This was to fulfill the word that he had spoken: “Of those whom you gave me I have lost not one.” 10 Then Simon Peter, having a sword, drew it and struck the high priest's servant[c] and cut off his right ear. (The servant's name was Malchus.) 11 So Jesus said to Peter, “Put your sword into its sheath; shall I not drink the cup that the Father has given me?”

12 So the band of soldiers and their captain and the officers of the Jews[d] arrested Jesus and bound him. 13 First they led him to Annas, for he was the father-in-law of Caiaphas, who was high priest that year. 14 It was Caiaphas who had advised the Jews that it would be expedient that one man should die for the people.

15 Simon Peter followed Jesus, and so did another disciple. Since that disciple was known to the high priest, he entered with Jesus into the courtyard of the high priest, 16 but Peter stood outside at the door. So the other disciple, who was known to the high priest, went out and spoke to the servant girl who kept watch at the door, and brought Peter in. 17 The servant girl at the door said to Peter, “You also are not one of this man's disciples, are you?” He said, “I am not.” 18 Now the servants[e] and officers had made a charcoal fire, because it was cold, and they were standing and warming themselves. Peter also was with them, standing and warming himself.

19 The high priest then questioned Jesus about his disciples and his teaching. 20 Jesus answered him, “I have spoken openly to the world. I have always taught in synagogues and in the temple, where all Jews come together. I have said nothing in secret. 21 Why do you ask me? Ask those who have heard me what I said to them; they know what I said.” 22 When he had said these things, one of the officers standing by struck Jesus with his hand, saying, “Is that how you answer the high priest?” 23 Jesus answered him, “If what I said is wrong, bear witness about the wrong; but if what I said is right, why do you strike me?” 24 Annas then sent him bound to Caiaphas the high priest.

25 Now Simon Peter was standing and warming himself. So they said to him, “You also are not one of his disciples, are you?” He denied it and said, “I am not.” 26 One of the servants of the high priest, a relative of the man whose ear Peter had cut off, asked, “Did I not see you in the garden with him?” 27 Peter again denied it, and at once a rooster crowed.