Wednesday prior to Proper 5 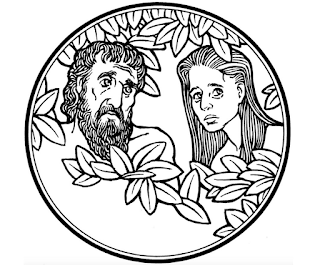 Genesis 3:8-15— God calls Adam to account for his sin. Here we see the consequences of the fall into sin. When the LORD confronts Adam, he flees and hides because of his fear of God. He realizes He is naked, which is considered an abomination. This results in his sense of shame. When the LORD asks for an explanation of his sin, both Adam and Eve blame others.

Where is Adam? He is not where he should be. Because of his sin, he has run away to hide. Sin always separates us from God. We hide because sin breeds fear of God. Not that God comes to Adam after he sinned. God is concerned about the quality of our lives. Sin disturbs and grieves God. Always God asks for an accounting.[2]

Sin may be forgiven but punishment goes with sin as the Scriptures teach, “the wages of sin is death.” No one escapes the penalty of doing wrong. God’s justice demands satisfaction. The Father is satisfied because of the death of His own Son.

What excuse or what explanation do we have for our disobedience, Adam sins again by refusing to admit his guilt. He blames Eve. Eve blames the serpent. It is also a common expression in our day too, “I have done no wrong.”

With the words of the hymn we must confess:

“In Adam we have all been one,
One huge rebellious man;
We all have fled that evening voice
That sought us as we ran.[3]”

Instead of hiding sin or making vein excuses simply confess your sin and then plead for the Lord’s mercy which is found in the satisfactory work of Jesus Christ on the cross raised for you for forgiveness and life.

A Prayer for those outside the Church: Almighty and everlasting God, You desire not the death of a sinner but that all would repent and live. Hear our prayers for those outside the Church. Take away their iniquity, and turn them from their false gods to You, the living and true God. Gather them into Your holy Church to the glory of Your name; through Jesus Christ, our Lord. Amen[4] -.2 June 2021—