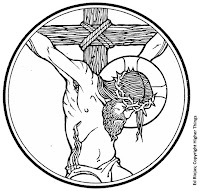 How One Malefactor Died

The mission of Christ in the world was not yet completed. It will only come to a conclusion when He says so. Only then can He say, “It is finished!”

As He hangs on a cross; suspended between earth and space - He still exercised the right of forgiving sins and of blessing. He will absolve a man even at the 9th hour. Because of his confession of faith. This confession is remarkable under the circumstances and limitations of the time. Tonight we consider the confession of a dying thief.

In the garden when our first parents Adam and Eve committed quiet violence against God’s command, when they ate from the tree, when they tried to be like God by their own efforts, they became enemies of God instead.

1.      As sons of Adam and daughters of Eve we disregard any respect for God. The 1st commandment reminds us that we should fear, love and trust in God above all things. We fall headlong into sin because we lack respect and fear of God. All sin can be lumped together under this 1st commandment.

2.      Yet, our sin will catch up with us. No man can escape his own sin. Every sin you commit will hunt you down and find you out and make you pay. There is no escape. There has never been one sin committed on earth that the man who committed it did not suffer for it. Maybe now not now; but there will be a reckoning.  There has never been one sin committed that paid. You may escape the law of man but you cannot escape the law of God.

We may demonstrate disrespect for God when we sin – but it is our sin which points us to the reality that we need to honor God - for He will ultimately come as judge and king. With the Psalmist we must confess; “If Thou Lord should mark iniquity O Lord, who would stand.”

B.     The dying thief revered God. He manifested penitence for sin and confessed. “We indeed justly; for we receive the due reward of our deeds” (V.41)

1.      When Adam fell headlong into sin He blamed God. “It was the woman which You gave me! She tricked me!” Eve points the finger at the serpent – she attributes her sin to the devil – “It was the serpent – he deceived me!” Both Adam and Eve were quick to charge someone else but they were both responsible. Both were held accountable.

2.      The dying Thief learned the lesson which Adam and Eve could not. He was lead to true repentance. He acknowledged his sin. He was heart sorry for his sin. He was willing to take the punishment which he deserved.

1.      He came to the realization that Jesus was a blameless man. Jesus suffered innocently – He was guiltless suffering for the guilty. And in that great exchange you are free. He took your sin as His own and suffered for it so that you could receive from Him clemency for all your sin.

2.      Jesus Christ the pure and holy Savior suffered innocently for our sin – for by His stripes we are healed.

Transition: Even at the 9th hour this man revered God and thus he prayed. Not to anyone or any form…he prayed to Christ, referring to Him as “Lord” – “Lord remember me when You come into Your kingdom!”

A.     As a believer – “Lord, remember me when thou comest into Thy kingdom.” (V.42) In the darkest “hour” humanly speaking, as death was looming over him he looked for that kingdom, when tried disciples fled, this man had faith in Jesus to enter into it.

B.     The reward of such faith – “Verily I say unto thee, ‘Today shalt thou be with Me in Paradise.” (V.43) Because of faith in Jesus’ work his death was a gate which leads to eternal life. When this dying thief died he took a walk from one end of the kingdom to the other from the kingdom of grace into the kingdom of glory. For us who remain here observing Christ’s suffering the promise spoken to this common thief is for you this night.

On that day heaven was open to a new believer. Jesus has promised to receive any who would come to Him by faith. In this eternal Kingdom of God we will live continually in the presence of the Lamb.  “I did not see a temple in the city, because the Lord God Almighty and the Lamb are its temple.” (Revelation 21:22)

In that final hour a dying thief entered paradise. And so will you. Deserving has nothing to do with it. It’s all grace. It’s a gift.

THAT GREAT EXCHANGE—GOD’S MERCY AND FORGIVENESS PURCHASED AT THE COST OF HIS OWN SON!  FOR GOD SO LOVED THE WORLD THAT HE GAVE HIS ONLY BEGOTTEN SON, THAT WHOSOEVER BELIEVETH IN HIM SHOULD NOT PERISH BUT HAVE EVERLASTING LIFE.