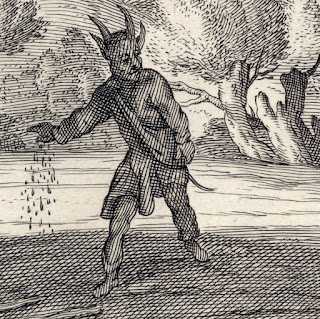 
The good Seed, which is “the Son of Man,” Jesus Himself (Matt. 13:37), brings forth a harvest of faith and bears good fruits in “the sons of the kingdom” (Matthew 13:38). Whatever is sown apart from His Word is of the devil, who plants the weeds of unbelief and sin, even among the people of God. Thankfully, the Lord is patient and He does not uproot the weeds, lest the plants also be destroyed. He lets “both grow together until the harvest” (Matthew 13:30) while He continues to preach repentance and forgiveness of sins.

Thus, He preserves His Church in righteousness, because He alone is “the King of Israel and his Redeemer” (Isaiah 44:6). Since all things are in His gracious care and keeping, “fear not, nor be afraid” (Isaiah 44:8).

For “the creation waits with eager longing for the revealing of the sons of God” (Romans 8:19), and in this hope we also wait with patience. Though we do not yet see it, “the Spirit helps us in our weakness” (Romans 8:26) and, in truth, “the sufferings of this present time are not worth comparing with the glory that is to be revealed to us” (Romans 8:18).


Heavenly Father, thought we do not deserve Your goodness, still You provide for all our needs of body and soul. Grant us Your Holy Spirit that we may acknowledge Your gifts, give thanks for all Your benefits, and serve You in willing obedience; through Jesus Christ our Lord.

1. Thy harvest field, O God,
With vicious tares stands marred,
Thy perfect toil and labor
Now spoiled by the invader.
Can wheat with sin infested
Be worth Thy love’s investment?

2. The scattered seed was pure.
Each kernel of Thy Word
Still has life-giving power.
In patience, dear Lord, shower
Thy Gospel grains among us
Until the final harvest.

3. When purple crowns spring forth,
Thy servants doubt the worth
Of tending wheat polluted:
“Lord, shall it be uprooted?”
Thou also must feel anguish
To watch Thy church so languish.

5. But by Thy grace sprouts up
A faithful, righteous crop.
Her fruit of Gospel preaching,
The noxious weeds o’erreaching,
Proclaims that Jesus’ labor
Has earned for us God’s favor.

6. Have mercy on us, Lord.
Preserve Thy holy Word.
Maintain a pure confession
Within this congregation.
Spare us from all false doctrine,
Our sin and weakness pardon.

7. God, by Thy gracious hand,
Thy Holy Spirit send
Our hearts to tend and water
That we Thy name may honor.
So cultivate among us
A bounteous, fruitful harvest! Amen.

The kingdom of heaven may be compared to a man who sowed good seed in his field, but while his men were sleeping, his enemy came and sowed weeds among the wheat and went away. (Matthew 13:24)

It has been noted that the Greek word for “weed” was a word used for a pernicious plant called the darnel.  When the darnel begins to grow it looks identical to the initial growth of a wheat plant.  Thus at the beginning of growth the entire field looks like wheat, even though a portion of it is weeds.

Thus it is in the church.  While the Apostles lived, but especially after they fell asleep, the devil twisted the apostolic doctrine, and the gates of hell were disguised as the doors to heaven.  Satan’s religion often speaks highly of Jesus, but it frequently denies His deity, or it denies his universal atonement, or it denies what is and isn’t sin, or it denies justification by grace…and the list goes on. Satan plants this counterfeit word in the hearts of certain people, and they spiritually grow up as sons of the evil one, yet they religiously stand next to the sons of the kingdom in the visible church.  The sons of the evil one also include those who brazenly live in unrepentant sin, behaving as if sin did not matter.

When individual pastors look out over their congregation, they cannot tell the difference between a darnel plant and a wheat plant.  At times a weed will display its true nature by spewing doctrines of demons, or by living in outward unrepentant sin, yet there cannot be absolute identification that such a person is a weed.  For even when false doctrines are spewed or when a person is living unrepentantly, it is still possible that person is not a weed! The pastor will constantly be correcting false doctrine or at times, for instance with the loving act of banning from the Supper, he will guide individuals to repentance.  However, since a pastor is constantly dealing with sinners, he is unable to differentiate weed from wheat.

So if a pastor cannot differentiate weed from wheat, why then did Jesus tell the parable?  There are numerous reasons for the parable, but consider the following.  The Son of Man establishes the wheat, the sons of the kingdom, in His Church; appropriately we deserve no credit. From the parable we stand warned that the devil is active—especially active in the visible church—and that pseudo-Christians will exist in congregations until the end of time.  As the weeds of the parable are understood to be the wheat-mimicking darnel, we also realize from the parable the difficulty in differentiating weed from wheat in a given congregation.  As a final thought, attempting to uproot the darnel before Judgment Day is not our business, for in so doing we may harm and uproot wheat. A corollary to this is that on Judgment Day the Judge will sort the wheat and weeds, sending His angels to gather and burn the weeds.

The wheat—those established by the Word of the cross as sons of the kingdom—will finally be gathered into God’s barn.  Understand the “barn” to be the new heaven and new earth, the wondrous paradise to be experienced by Christ’s resurrected people into eternity.

:24
Ἄλλην παραβολὴν παρέθηκεν αὐτοῖς λέγων• Ὡμοιώθη ἡ βασιλεία τῶν οὐρανῶν ἀνθρώπῳ [a]σπείραντι καλὸν σπέρμα ἐν τῷ ἀγρῷ αὐτοῦ.
He put another parable before them, saying, “The kingdom of heaven may be compared to a man who sowed good seed in his field,

[a] Probably darnel, a wheat-like weed

:27
προσελθόντες δὲ οἱ δοῦλοι τοῦ οἰκοδεσπότου εἶπον αὐτῷ• Κύριε, οὐχὶ καλὸν σπέρμα ἔσπειρας ἐν τῷ σῷ ἀγρῷ; πόθεν οὖν ἔχει ζιζάνια;
And the servants[b] of the master of the house came and said to him, ‘Master, did you not sow good seed in your field? How then does it have weeds?’

:28
ὁ δὲ ἔφη αὐτοῖς• Ἐχθρὸς ἄνθρωπος τοῦτο ἐποίησεν. οἱ δὲ  δοῦλοι αὐτῷ λέγουσιν• Θέλεις οὖν ἀπελθόντες συλλέξωμεν αὐτά;
He said to them, ‘An enemy has done this.’ So the servants said to him, ‘Then do you want us to go and gather them?’

:29
ὁ δέ φησιν• Οὔ, μήποτε συλλέγοντες τὰ ζιζάνια ἐκριζώσητε ἅμα αὐτοῖς τὸν σῖτον•
But he said, ‘No, lest in gathering the weeds you root up the wheat along with them.

A caution, The more zealous we become to root out evil we may do more harm.

The Parable of the Weeds Explained
:36
Τότε ἀφεὶς τοὺς ὄχλους ἦλθεν εἰς τὴνοἰκίαν. καὶ προσῆλθον αὐτῷ οἱ μαθηταὶ αὐτοῦ λέγοντες• Διασάφησον ἡμῖν τὴν παραβολὴν τῶν ζιζανίων τοῦ ἀγροῦ.
Then he left the crowds and went into the house. And his disciples came to him, saying, “Explain to us the parable of the weeds of the field.”

:40
ὥσπερ οὖν συλλέγεται τὰ ζιζάνια καὶ πυρὶ  καίεται, οὕτως ἔσται ἐν τῇ συντελείᾳ τοῦ αἰῶνος•
Just as the weeds are gathered and burned with fire, so will it be at the end of the age.

:41
ἀποστελεῖ ὁ υἱὸς τοῦ ἀνθρώπου τοὺς ἀγγέλους αὐτοῦ, καὶ συλλέξουσιν ἐκ τῆς βασιλείας αὐτοῦ πάντα τὰ σκάνδαλα καὶ τοὺς ποιοῦντας τὴν ἀνομίαν,
The Son of Man will send his angels, and they will gather out of his kingdom all causes of sin and all law-breakers,

:42
καὶ βαλοῦσιν αὐτοὺς εἰς τὴν κάμινον τοῦ πυρός• ἐκεῖ ἔσται ὁ κλαυθμὸς καὶ ὁ βρυγμὸς τῶν ὀδόντων.
and throw them into the fiery furnace. In that place there will be weeping and gnashing of teeth.

:43
Τότε οἱ δίκαιοι ἐκλάμψουσιν ὡς ὁ ἥλιος ἐν τῇ βασιλείᾳ τοῦ πατρὸς αὐτῶν. ὁ ἔχων  ὦτα ἀκουέτω.
Then the righteous will shine like the sun in the kingdom of their Father. He who has ears, let him hear.