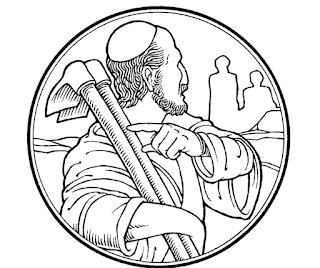 Mark 4:3-9 – This passage is the inspiration for the hymn, “Almighty God, Your Word is Cast” {LSB 577}.  The sower goes out to sow his grain. God’s Word will work where it is planted. We trust Him to do His work. All He asks of us is to faithful in the sharing of Christ’s living Word.

Almighty God, thy Word is cast
Like seed into the ground;
Now let the dew of heav'n descend,
And righteous fruits abound

“Almighty God, Thy word is cast” was a song written by John Cawood in 1815. “After a Sermon” was its original title, and it was published in five stanzas of four lines in 1819 on the 8th edition of Cotterill’s Selection. It became well-known as a congregational hymn in 1825 after it has appeared in James Montgomery’s Christian Psalmist. Later on, it became wide-spread in all English-countries. There are some versions where they omit one or more stanzas and some they added a doxology. The best version of the hymn with minimal alteration was found in Taring’s Collection in 1882.

John Cawood, M.A. was born on March 18, 1775, at Matlock in Derbyshire. He was the son of a small farmer, and he had very limited education when he was a child. He found himself engaged in the service of Rev. Mr. Cursham in Sutton-in-Ashfield, Notts when he was eighteen years old. He persevered and strived to improve himself. With the help of the people who supported him, he was able to enroll in 1797 at St. Edmund Hall in Oxford. He graduated his B.A. in 1801 and took Holy Orders right after. He became Curate of Ribsford and Dowles and later on became Incumbent of St. Ann’s Chapel of Ease in Bewdley, Worcestershire. He completed his M.A in 1807. He composed 13 hymns in all; however, these were never printed under his name or to any publication. His proses were anyhow published, and he died on November 1852.

A Prayer for the work of the congregation – Almighty God and Lord, as You have called us to labor in Your vineyard, so grant us now Your presence. Enlighten and guide us by Your Word that in all matters of deliberation we may always consider the best interests of Your church and this congregation. Let Your Holy Spirit rule and direct our hearts that, in the spirit of Christian love, we may present and discuss matters and be kindly disposed toward one another, to the end that all we say and do may please You; through Jesus Christ, our Lord.