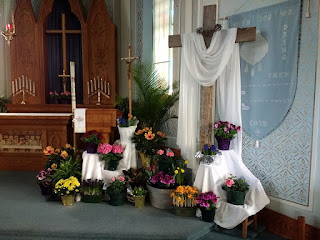 Jesus, fully aware that His mission of salvation. Will soon reach a successful culmination. He is anxious. To return back to the Father in heaven. Through whom He also will be glorified.  And He comes to His disciples. In whom, through faith, He also dwells in glory.

By faith you will glory in knowing Christ. And in participating by grace in a perfectly crafted salvation plan for which God in His fullness deserves all glory.

We are often slow to understand this glory. And even slower to realize that life eternal is knowing God completely. All because we too readily follow our natural inclination to be with ourselves.  Alone.  And not to be one with God.

Through the Gospel - God leads us from sin to salvation.

Almighty God, as Your only begotten Son, our Lord Jesus Christ ascended into the heavens so may we also ascend in heart and mind  to continually dwell there with Him. Ascended Lord, Bless Thy Word, that we may trust in Thee.

Sometimes, people pat themselves on the back because no one else will do it. They want at least someone to acknowledge that they have done something praiseworthy. If no praise will come they might act out just to get attention.

So often we see this happen in the classroom at school. From observation. And from experience. We might soon discover that the "class clown" acts up because at least he is getting some sort of recognition. Acknowledgment. Or attention.

Do we have to act up or speak out to get God's attention? Not so. God has honored us. Not because we have done something worthy.

But because He has done something noteworthy for us. He has glory in the accomplishment of our salvation. And we, by grace, are granted the privilege to share in His glory.

In Christ's redemptive work there is no question that The Glory Hour Has Arrived!

1          The glory hour has arrived for a Father whose plan is always perfect.

A.        As a part of this plan God the Father gave Jesus the power to save us. ‘For You granted (the Son) authority over all people, that He might give eternal life to all those You have given Him.” (V.2)

That was the Father's perfect plan. From the very beginning of time. To save the world through His Son Jesus. He gave His Son both the power and the authority to grant life eternal to those who are called to believe and trust in Him.

B.        Your salvation was never left up to mere speculation. The Father was directing your salvation every step of the way. He guided the process. - From the beginning to the time it was brought to completion.

“I have brought You glory on earth by completing the work you gave Me to do. And now, glorify me in Your presence with the glory I had with you before the world began.” (Vv.4-5)

C.        What wonderful news this plan of salvation happens to be. The Father not only directed the process from beginning to end. He also directed His Son to the right people. In the right way. With exactly the right words to say. This is what we call "divine" or "special" revelation. The voice of Jesus when He spoke while being in the world. And now.  As it comes to you from the pages of the Bible. He speaks the Father's message to you.

“I have revealed You to those whom You gave me out of this world. They were Yours; You gave them to Me and they have obeyed Your word.” (v.6)

He delivered His word of truth when He said from the cross; "It is finished!" He further confirmed that Word in you. When He called y by the Gospel in your baptism. And today.

Through the power of that same Word He says to you, "I am with you always even until the end of the age" (Matthew 28:28)

Transition: The Father set His plan of saving this world into motion when His own Son Jesus Christ broke into time and space. To live with and among us. As Jesus walked the face of this earth. He was moving in a fixed direction to the cross. By these words spoken by our risen Savior. He says to the Father that His mission has been accomplished.

A.     To accomplish His mission Jesus gave up something. He surrendered His rightful glory in order to carry out His work.  “And now, Father, glorify Me in Your presence with the glory I had with You before the world began.” (v.5)
John in his gospel describes Jesus' leaving the glories of heaven this way, "And the Word became flesh and dwelt among us...and we have beheld His ...full of grace and truth" (John 1)
B.     In accomplishing this mission. Which the Father gave to Jesus. He did exactly what the Father told Him He was supposed to do.

1.        The meaning of eternal life was made plain in this plan. For Him to suffer and die meant that there would be a great exchange taking place. The Father exchanged your sin for His own Son's righteousness. That you might receive all of the righteousness of God which was found in Him.

2.        What does this mean for you? What all this means is that the people to whom Jesus was directed learned of Him and believed. You have learned of Jesus. And you too believe. These words of the Savior are directed and intended for you. The glory hour has arrived. You have beheld the glory of Jesus. And by faith.  Worked into your heart by the power of the Holy Spirit.  You too believe.

Transition: In sending His Son the Father had you in mind. He sent Jesus to accomplish His mission for you, that you might receive salvation and live. As a result this salvation is for each and every believing child of God.

A.        As a believer you are the recipient of a saving knowledge that only God could give. You know and believe in Jesus Christ. Because Christ. Working through His Holy Spirit. Has brought you to a saving knowledge, faith and trust in Him.

B.        As a believer. You have a Savior who is also praying for your endurance in faith. Jesus says, "Father I am praying for those who will believe that they might remain strong and pure and committed no matter what circumstance might come their way." (v.11)

Jesus knew that there would be challenges in living the faith. And remaining faithful. That is why He went to the Father in prayer for you. And continues to intercede for you.  That you might remain faithful unto death - and thus receive the crown of everlasting life
C.     As a believer - You now have the honor of reflecting the "oneness" which comes from knowing Christ by faith. As the Father and the Son are one. So likewise - In having a connection with the Savior - You are one with Christ.
As the hymn writer so wonderfully reminds us "As the branch is to the vine, I am His and He is mine." [TLH #342 stanza 1]. There is an oneness. A uniqueness.  A togetherness. That each Christian has with the Savior. And it is all made possible because the Savior’s prayer for you. That you might remain in Him.

When Jesus was on the verge of accomplishing everything He came to do. He knew the time for glory had arrived. His Father deserved glory. He received glory. But wonder of wonders. And miracle of miracles. You as a believer. As being a part of being His people. You too benefit from the glory of His salvation.

In Christ the "glory hour" has arrived. And He has honored you by inviting you through faith to share in it.