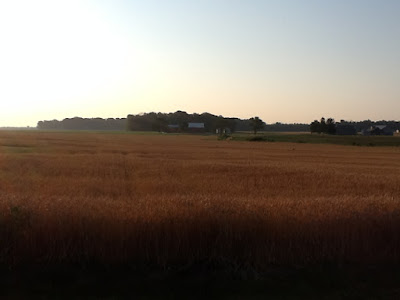 Prayer of the Day
God, you are the tree of life, offering shelter to all the world. Graft us into yourself and nurture our growth, that we may bear your truth and love to those in need, through Jesus Christ, our Savior and Lord.

Note Only Mark records this parable.
Whereas the parable of the sower stresses the importance of proper soil for the growth of seed and the success of the harvest, here the mysterious power of the seed itself is emphasized. The gospel message contains its own power.

Some see this parable chiefly as a parable of contrast. As seedtime is followed in due time by harvest, so will the present hiddenness and ambiguousness of the kingdom of God be succeeded by its glorious manifestation. This parable conveys both a warning and a word of encouragement to Jesus’ disciples. However important their role may be (21–25), they are not to imagine that the Kingdom is their kingdom or its triumph their triumph;the Kingdom remains God’s mysteriously creative work. He is “Lord of the harvest” (Mark 9:38). This serves for encouragement also; however slow and unspectacular the “progress” of the Kingdom may be, the outcome is in the sure hands of the Creator. Men may pray, “Thy kingdom come,” with patience and confidence.

26Καὶ ἔλεγεν, Οὕτωςἐστὶν ἡ βασιλεία τοῦθεοῦὡςἄνθρωπος βάλῃτὸν σπόρον ἐπὶ τῆςγῆς
And he said, “The kingdom of God is as if a man should scatter seed on the ground.

At first there may be little to show for the sowing of the seed, and a skeptical observer might think that nothing is happening. But there is an inner dynamic in the message which will in due time produce its effect, even if human insight cannot fathom how the process works (ὡςοὐκοἶδεν αὐτός). In the meantime the wise disciple will wait in confidence for God's work to be accomplished in God's way. The kingdom of God, then, does not depend on human effort to achieve it, and human insight will not be able to explain it.

29ὅταν δὲ παραδοῖ ὁ καρπός, εὐθὺς ἀποστέλλειτὸδρέπανον, ὅτι παρέστηκεν ὁ θερισμός.
But when the grain is ripe, at once he puts in the sickle, because the harvest has come.”

The Parable of the Mustard Seed 30-34
The main point of this parable is that the kingdom of God seemingly had insignificant beginnings. It was introduced by the despised and rejected Jesus and his 12 unimpressive disciples. But a day will come when its true greatness and power will be seen by the entire world. See also Matthew 13:31–33; Luke 13:18-f. This is another parable of contrasts, but the contrast may not be, as is sometimes thought, between the Church's insignificant beginnings and the wide spread, powerful organization it was to become: it is rather between the present veiled-ness of the Kingdom of God and its future glorious manifestation at the Parousia.

30Καὶ ἔλεγεν, Πῶςὁμοιωσωμεντὴν βασιλείαν τοῦθεοῦ, ἢ ἐντίνι αὐτὴνπαραβολῇθῶμεν;
And he said, “With what can we compare the kingdom of God, or what parable shall we use for it?

32καὶ ὅταν σπαρῇ, ἀναβαίνει καὶ γίνεται μεῖζον πάντωντῶν λαχάνων καὶ ποιεῖκλάδουςμεγάλους, ὥστεδύνασθαι ὑπὸ τὴνσκιὰν αὐτοῦτὰ πετεινὰτοῦοὐρανοῦ κατασκηνοῦν.
yet when it is sown it grows up and becomes larger than all the garden plants and puts out large branches, so that the birds of the air can make nests in its shade.”

κατασκηνοῦν (kataskenoun|to nest/live/dwell) – See also Ezekiel 17:23; 31:6; Daniel 4:12,14,21. When at last he comes in his glory, who is himself the Kingdom (1:15), he will be not only the Judge of all men, but also the one under whose shadow all who have truly trusted in him will find shelter. Drawing attention to these same OT texts and particularly to 'all great nations' in Ezekiel 31:6, the allusion here may be intended to indicate the future wide scope of the kingdom of God, within which many nations (not only Israel) will find their place. Of this and the parable of the growth of the kingdom in verses 26-29, the two parables of verses 26-32 thus both warn against underestimating the significance of the proclamation of the kingdom of God, however unimpressive its initial impact may seem. What has begun in the Galilean ministry of Jesus will, by the power of God, one day prove to be of ultimate significance. If for the time being its power is hidden, it is not for that reason any less certain, and its growth will be spectacular.

- Jesus used parables to illustrate truths, stimulate thinking and awaken spiritual perception. The people in general were not ready for the full truth of the gospel. When alone with his disciples Jesus taught more specifically, but even they usually needed to have things explained.