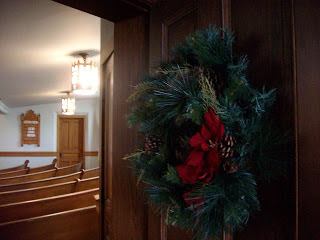 Before a witness is to give his testimony in a court, for example, he is asked to swear to tell the truth, the whole truth, and nothing but the truth. John the Baptist was one who told the truth concerning Jesus. Likewise, a Christian is a witness. The need for more witnessing is demonstrated by the facts of a declining church membership in many parts of our country.

While our congregation has been blessed with new members in many places across our great country this is not happening. It is estimated that close to a third of the adult population in the U S remain un-churched. [1] This has prompted our own Missouri Synod to declare the United States as a mission field. And yet, what we see happening at the same time is a decline in the number of foreign missionaries.

Yet, by the grace of God, opportunities to share the good news of Jesus Christ are all around us. You do not have to travel overseas to be a part of the Lord’s mission, the very fact that you are a follower of Jesus Christ makes you His witness. -  We are not asked to be successful. We are only asked to witness and be faithful. -  What does it mean to be a witness for Jesus Christ?

Each of us actually is just like John the Baptist. We are not called to be God but to be a witnessed for God. We are called simply to tell others what we have seen and heard. Some might say, “But I don’t know everything that is in the Bible, how can I possibly be a witness?” That may be true, that you don’t know everything in the Bible but you do know Him who has saved you and Him who has called you to faith. All we are called to do is share with others what we have come to know as truth. We are called to witness of what you have heard and seen. In fact, the early followers of Jesus Christ would have only one message, “we cannot stop talking about what we have seen and heard.” [2]

In this season of Advent at no other time in the year are our witness and our confession of the truth so clear. Everywhere you go you can hear carols sung and the word Jesus is on everyone’s lips. He’s the reason for this season. As we speak of the birth of the one that we celebrate this year, we have an excellent opportunity to tell others about the Savior who has come to set us free from sin, death and the power of the devil.

3. Because you are a Christian you really are a witness. This is John’s point. To be a witness for Christ means only to know Christ personally. Listen again to John’s words. “I baptize with water John answered them. There is standing before you someone you don’t know, the One who is coming after me. I’m not good enough to untie His shoe strap.” Vv.26-27 [Beck translation]

The voice of the earth Christians, “we cannot stop talking about what we have seen and heard” is good advice. These are our marching orders. May that be our confession as we wait the days before the celebration of Christmas. Rejoice for Christ has come. In Him, we have life. In Him, we make a good confession.
_________
Words -800
Passive Sentences -16%
Readability -82.3%
Reading Level -5.3

[1] A new survey released by The Barna Group, which has been tracking America’s religious behavior and beliefs since 1984, reveals that one out of every three adults (33%) is classified as unchurched - meaning they have not attended a religious service of any type during the past six months
[2] Acts 4:20