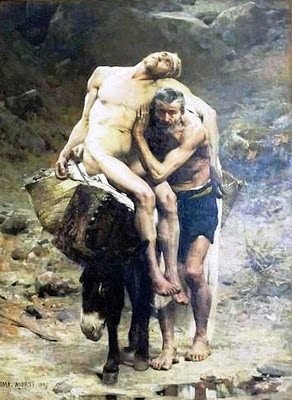 Lord Jesus Christ, in Your deep compassion You rescue us from whatever may hurt us. Teach us to love You above all things and to love our neighbor as ourselves; for You live and reign with the Father and the Holy Spirit, one God, now and forever.

An expert in the law stood up to test Jesus. “What must I do to inherit eternal life?” he asks. The answer the Savior gives him puts this “young buck” in a rather awkward spot. “Wanting to justify himself” Luke tells us that he asks yet another question, “And who is my neighbor?”  Upon hearing the parable of the Good Samaritan this expert answers his own question, Who is your neighbor – well, it’s, “The one who had mercy.” Mercy. We’re good at talking about it but here standing before us is mercy, with clothes on!  The one who has mercy is like…

1.      Not like the robbers who beat the man leaving him half dead.

A.     To beat a man obviously does not show compassion. It demonstrates brutality, the same brutality that’s been known to man from the dawn of time. It was Kane who killed his brother Able. David had Uriah executed in battle to cover up an extramarital affair. The officials and nobles of the people stoned Stephen to death because they could not bear and could not handle hearing the truth. Do such things happen in our sophisticated world today?

B.     Yet, how do we reach and react with words?  We can kill a person’s reputation with our speech!  All you would need to do is start a half-truth. If told enough times - within a week - it would be spread all over town - and in many sections of town - it would be believed!. And no matter what the innocent tries to do to regain his good name he cannot. People will believe what they want to hear.  Sometimes being the victim of a soiled reputation due to rumor or innuendo or suspicion is worse then death!

A.     To come in contact with a dead body would cause one to be ceremonially “unclean.” The Priest and Levite had their own religious path set out before them. To stop and help this helpless soul would take time out of his already busy day. He had his course already set out. To stop and help would be an inconvenience. He had a schedule to be kept. After all, he was on his way to the service.

B.     Can we become like this Levite or Priest, avoiding opportunities for service all the while making every effort to appear pious and sincere?  Are we content to live in our own “comfort zone”?  To show mercy often means we have to extend time and energy when we don’t want to.  Often it means we will have to take time our of our busy schedules and our hurried live. Sometimes it means we will have to involve ourselves in the lives of others.  In an episode of the sitcom M*A*S*H Frank Bernes refused to get involved in the life of another. He explained, “If I did that it would get messy. And I don’t like messy!” At times, our involvement means we will be taking the time to help when we know we are walking down a one-way street.

Transition: The Priest and Levite refused to offer mercy because it didn’t fit into their narrow definition of what mercy involves. The Savior doesn’t define mercy He offers it!

3.      Like the Samaritan who bound his wounds and carried for him.

A.     He bound up the man’s wounds. The Savior continues to bind up the wounds of many. He began His ministry showing mercy. Recall His first sermon – The scroll of the prophet Isaiah was handed to Him. Unrolling it, he found the place where it is written, “The Spirit of the Lord is on me, because he has anointed me to preach good news to the poor. He has sent me to proclaim freedom for the prisoners, and recovery of sight for the blind, to release the oppressed, to proclaim the year of the Lord’s favor.” Then he rolled up the scroll, gave it back to the attendant and sat down. The eyes of everyone in the synagogue were fastened on him, and he began by saying to them, “Today this scripture is fulfilled in your hearing!” (Luke 4:16-22)

His assistance in your life is not some sort of duty in which we are obliged  to do something. It’s not as if it’s a favor we’re asking Him to perform for us. He acts for you - Purely out of Fatherly love goodness mercy without any worthiness in me. Thus it is my duty to thanks and praise to serve and obey Him. This is His attitude toward you.

“And who is my neighbor?”  It is the one the Savior places in your life to show mercy, empathy, compassion. As the Savior so has shown His great love for you – show forth in your own lives His love, care and consideration.

Image The Good Samaritan by Aime Morot Le Bon
Posted by Pastor D at 12:00 AM