He had a reputation for secret gift-giving, such as putting coins in the shoes of those who left them out for him, and thus became the model for Santa Claus, whose English name comes from the German Sankt Niklaus. His reputation evolved among the faithful, as is common for early Christian saints. In 1087, his relics were furtively translated to Bari, in southern Italy; for this reason, he is also known as Nicholas of Bari. 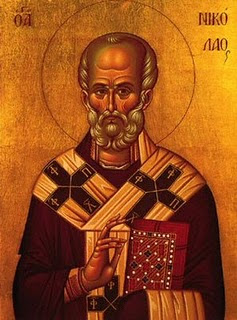 The historical Saint Nicholas is remembered and revered among Catholic and Orthodox Christians. He is also honored by various Anglican and Lutheran churches. Saint Nicholas is the patron saint of sailors, merchants, archers, and children, and students in Greece, Belgium, Romania, Bulgaria, Georgia. Russia, the Republic of Macedonia. Slovakia, Serbia and Montenegro.
Posted by Pastor D at 10:37 AM