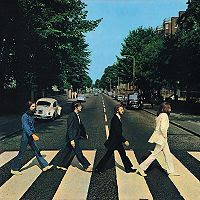 Heard on the BBC this morning that the picture on the album cover of the Beatles "Abby Road" was shot 40 years ago today! Now their music is played at the nursing home in Monroeville.
Abbey Road is the eleventh official U.K. album and seventeenth U.S. album released by The Beatles. Though work on Abbey Road began in April 1969, making it the final album recorded by the band, Let It Be was the last album released before the Beatles' dissolution in 1970. Abbey Road was released on 26 September 1969 in the United Kingdom, and 1 October 1969 in the United States. It was produced and orchestrated by George Martin for Apple Records. Geoff Emerick was engineer, Alan Parsons was assistant engineer, and Tony Banks was tape operator.[1] It is regarded as one of The Beatles' most tightly constructed albums, although the band was barely operating as a functioning unit at the time.[2][3] Rolling Stone magazine named it the 14th greatest album of all time,[4] even though the magazine initially gave the album a mixed reception: Their November 15, 1969 issue features two very different reviews - a strongly negative one from Ed Ward, who particularly criticizes its overproduction, and a rave review from John Mendelsohn.

Source:
http://en.wikipedia.org/wiki/Abbey_Road_(album)
Posted by Pastor D at 7:04 AM