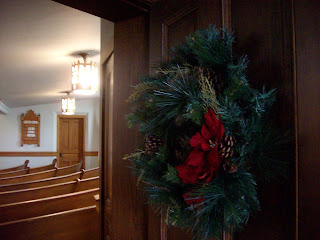 The Lord Jesus Comes in Meekness and Humility to Save Us

Stir up You power, O Lord, and come, that by Your protection we may be rescued from the threatening perils of our sins and saved by Your mighty deliverance; for You live and reign with the Father and the Holy Spirit, one God, now and forever.

Although we pray that God “would rend the heavens and come down” (Isaiah 64:1), that He would take vengeance against our enemies, we ourselves “have all become like one who is unclean, and all our righteous deeds are like a polluted garment” (Isaiah 64:6). We have continued in our sins for “a long time, and shall we be saved?” (Isaiah 64:5). Yet the Lord does not punish us in anger. He comes in voluntary meekness and humility to save us by His grace. Just as He once came into Jerusalem to sacrifice Himself for us upon the cross (Mark 11:4–8), He still comes to His Church with the fruits of His Passion. By His ministry of the Gospel, we are “enriched in him in all speech and all knowledge,” and so He will “sustain you to the end” (1 Corinthians 1:5, 8). Although “heaven and earth will pass away,” His words “will not pass away” (Mark 13:31). As He sends disciples to call us to Himself in the fellowship of His Church, so will He “send out the angels” to gather us and all of His elect “from the ends of the earth” to Himself in heaven forever (Mark 13:27).
“And they brought the [donkey] colt to Jesus and threw their cloaks on it, and he sat on it.” (Mark 11:7)
Rev. Dr. Daniel J Brege
Advent means “coming” and on this first Sunday in Advent we are reminded why the Christ came.  He came in order to enter Jerusalem so that He would accomplish our salvation by His death and resurrection.  As Advent begins, our Palm Sunday Gospel reminds us that as we prepare to celebrate Christmas we must always keep Christ’s reason-for-coming clearly in focus.
When the original Passover event occurred—the event marking the deliverance of the children of Israel from the hand of the Egyptians—God used lambs as His means to create this deliverance.  On the 10th day of the month of Nisan the father of a Jewish household was to select for his family a perfect yearling lamb.  For four days this lamb was treated like a family pet…but then it was to be sacrificed on Nisan 14!  The blood of such a Passover lamb was then placed on the doorposts and lintels of the doorways to Jewish homes, and then the members of a lamb’s family roasted and ate the lamb.  As a result, by God’s grace death passed over that home; because of the lamb’s blood the members of that household were spared the death that would strike the Egyptians.
Everything that God commanded the Jews to do in relation to worship and salvation pointed to the Christ, including the command to continue celebrating the Passover.  Additionally there were numerous Old Testament prophecies specifically predicting the Christ. Ultimately the believing Jews of the Old Testament realized that when the Christ would come, all would be fulfilled in Him (Jn 1:45; 5:39).
On that 10th of Nisan when the final week of Jesus’ humbled life began, He prepared to ride a donkey into Jerusalem.  At that time some Jewish fathers still followed the custom of selecting their family’s Passover lamb on Nisan 10.   So on this 10th day of Nisan some 2,000 years ago God the Father directs us to behold His Son as the final, perfect, chosen Passover Lamb.  No earthly father chose this lamb; God the Father chose Him to be the sacrifice for His family.  We are to realize and believe He is our Passover Lamb, whose death delivers neither from Pharaoh nor from slavery to the Egyptians nor from the death that would strike all who had no lamb’s blood on their doorposts.  The blood of this infinitely powerful Passover Lamb delivers from Satan and from slavery to sin and death, and His blood, shed at the cross, causes death to pass over all marked with that blood.  We have been marked with that blood in Holy Baptism (1 Jn 5:6-8), and in Holy Communion it has entered the portal of our body.  Appropriately the Apostle Paul would explain, “Christ our Passover Lamb has been sacrificed for us.” (1 Cor 5:7b).
The Christ is the grand Passover Lamb. So how did God the Father verify that Jesus is the Christ?  He did it frequently; He did it uniquely through the prophet Zechariah who predicted that the Christ would be identified by his riding into Jerusalem on a donkey (Zech 9:9).  Of Zechariah’s prophecy, Jewish-born scholar Alfred Edersheim writes, “…with singular unanimity the Talmud and the ancient Rabbinic authorities have applied this prophecy [of Zechariah] to the Christ.” (Life and Times, 370).
Saint Peter truly explains what Advent is ultimately about: In the Christ, whose coming was long anticipated “…you were ransomed from the futile ways inherited from your forefathers, not with perishable things such as silver or gold, but with the precious blood of Christ, like that of a lamb without blemish or spot (1 Pe 1:18).”  As an infant Jesus was intimated to be a newborn lamb when the shepherds visited him in Bethlehem.  John the Baptist declared Him to be the Lamb of God who takes away the sin of the world. Finally, for our salvation, on the 10th day of Nisan some 2,000 years ago, Jesus Christ is identified as the Passover Lamb of God—riding into Jerusalem on a donkey.

:3 καὶ ἐάν τις ὑμῖν εἴπῃ• Τί ποιεῖτε τοῦτο; εἴπατε [e]ὅτι Ὁ κύριος αὐτοῦ χρείαν ἔχει• καὶ [f]εὐθὺς αὐτὸν ἀποστέλλει [g]πάλιν ὧδε.
If anyone says to you, ‘Why are you doing this?’ say, ‘The Lord has need of it and will send it back here immediately.’”

:4 [h]καὶ ἀπῆλθον καὶ εὗρον πῶλον δεδεμένον [i]πρὸς θύραν ἔξω ἐπὶ τοῦ ἀμφόδου, καὶ λύουσιν αὐτόν.
And they went away and found a colt tied at a door outside in the street, and they untied it.

:5 καί τινες τῶν ἐκεῖ ἑστηκότων ἔλεγον αὐτοῖς• Τί ποιεῖτε λύοντες τὸν πῶλον; And some of those standing there said to them, “What are you doing, untying the colt?”

:6 οἱ δὲ εἶπαν αὐτοῖς καθὼς [j]εἶπεν ὁ Ἰησοῦς• καὶ ἀφῆκαν αὐτούς.
And they told them what Jesus had said, and they let them go.

:7 καὶ [k]φέρουσιν τὸν πῶλον πρὸς τὸν Ἰησοῦν, καὶ [l]ἐπιβάλλουσιν αὐτῷ τὰ ἱμάτια αὐτῶν, καὶ ἐκάθισεν ἐπ’ [m]αὐτόν.
And they brought the colt to Jesus and threw their cloaks on it, and he sat on it.

:8 [n]καὶ πολλοὶ τὰ ἱμάτια αὐτῶν ἔστρωσαν εἰς τὴν ὁδόν, ἄλλοι δὲ στιβάδας [o]κόψαντες ἐκ τῶν ἀγρῶν.
And many spread their cloaks on the road, and others spread leafy branches that they had cut from the fields.

:9 καὶ οἱ προάγοντες καὶ οἱ ἀκολουθοῦντες [p]ἔκραζον• Ὡσαννά• Εὐλογημένος ὁ ἐρχόμενος ἐν ὀνόματι κυρίου•
And those who went before and those who followed were shouting, “Hosanna! Blessed is he who comes in the name of the Lord!

The theme of Mark 13:24-37 is "Stay Awake!"
Why do I have to stay awake and watch the door while everyone else gets to go about his/her normal business? - The question is: How is: How is my life during these Advent days like that of the door keeper watching and waiting, alert and awake, night and day, for the return of his master?

The Coming of the Son of Man
:24 Ἀλλὰ ἐν ἐκείναις ταῖς ἡμέραις μετὰ τὴν θλῖψιν ἐκείνην ὁ ἥλιος σκοτισθήσεται, καὶ ἡ σελήνη οὐ δώσει τὸ φέγγος αὐτῆς,
“But in those days, after that tribulation, the sun will be darkened, and the moon will not give its light,

:25 καὶ οἱ ἀστέρες [a]ἔσονται ἐκ τοῦ οὐρανοῦ πίπτοντες, καὶ αἱ δυνάμεις αἱ ἐν τοῖς οὐρανοῖς σαλευθήσονται.
and the stars will be falling from heaven, and the powers in the heavens will be shaken.

:27 καὶ τότε ἀποστελεῖ τοὺς [b]ἀγγέλους καὶ ἐπισυνάξει τοὺς [c]ἐκλεκτοὺς ἐκ τῶν τεσσάρων ἀνέμων ἀπ’ ἄκρου γῆς ἕως ἄκρου οὐρανοῦ.
And then he will send out the angels and gather his elect from the four winds, from the ends of the earth to the ends of heaven.

:29 οὕτως καὶ ὑμεῖς, ὅταν [e]ἴδητε ταῦτα γινόμενα, γινώσκετε ὅτι ἐγγύς ἐστιν ἐπὶ θύραις.
So also, when you see these things taking place, you know that he is near, at the very gates.

:30 ἀμὴν λέγω ὑμῖν ὅτι οὐ μὴ παρέλθῃ ἡ γενεὰ αὕτη μέχρις οὗ [f]ταῦτα πάντα γένηται.
Truly, I say to you, this generation will not pass away until all these things take place.

:31 ὁ οὐρανὸς καὶ ἡ γῆ [g]παρελεύσονται, οἱ δὲ λόγοι μου οὐ [h]μὴ [i]παρελεύσονται
Heaven and earth will pass away, but my words will not pass away.

No One Knows That Day or Hour
:32 Περὶ δὲ τῆς ἡμέρας ἐκείνης ἢ [j]τῆς ὥρας οὐδεὶς οἶδεν, οὐδὲ οἱ ἄγγελοι [k]ἐν οὐρανῷ οὐδὲ ὁ υἱός, εἰ μὴ ὁ πατήρ.
“But concerning that day or that hour, no one knows, not even the angels in heaven, nor the Son, but only the Father.

:33 βλέπετε [l]ἀγρυπνεῖτε, οὐκ οἴδατε γὰρ πότε ὁ καιρός ἐστιν•
Be on guard, keep awake.[a] For you do not know when the time will come.

:36 μὴ ἐλθὼν ἐξαίφνης εὕρῃ ὑμᾶς καθεύδοντας•37 [p]ὃ δὲ ὑμῖν λέγω πᾶσιν λέγω• γρηγορεῖτε.
lest he come suddenly and find you asleep. 37 And what I say to you I say to all: Stay awake.”

We know what to watch for.

We, the elect who have been gathered in, know the worlds story.  We are no longer watching for signs leading up to Jerusalem's end but the transition from the old order of Jerusalem and its temple to the new Golgotha and its cross.

We know Whom We watch for.

We know whom is coming. Knowing our lord as we do should be all it takes to keep us awake and watchful through this world's long Advent season.