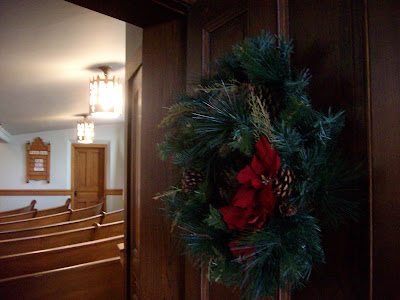 Stir up our hearts o Lord, to make ready the way of Your only-begotten Son, that by His coming we may be enabled to serve You with pure minds.

By the Preaching of Repentance, We Are Prepared for the Coming of the Lord

“John the Baptist came preaching in the wilderness of Judea, ‘Repent’” (Matthew 3:1–2). His preaching of repentance for the forgiveness of sins prepared people for the coming of Christ into the world. John’s work was historically complete with the incarnate advent of Jesus, but his vital ministry continues in preaching Law and Gospel. The Son of God has come in the flesh, “a shoot from the stump of Jesse, and a branch from his roots” (Isaiah 11:1), and continues to bear the fruits of righteousness. His good tree of the cross is “a signal for the peoples” (Isaiah 11:10), by which He calls the nations to repentance. “With the rod of his mouth, and with the breath of his lips” (Isaiah 11:4), He slays the wicked and brings the dead to life, making sons of Abraham out of lifeless stones. So also the “root of Jesse” comes to us, “even he who arises to rule the Gentiles” (Romans 15:12), that “we might have hope” and be filled “with all joy and peace in believing” (Romans 15:4, 13).

Some have accused Lutherans (and other Christians) of over-emphasizing the Sacrament of Holy Baptism.  As a preliminary defense, nearly every book of the New Testament speaks about Baptism. Even more so consider that when God introduced the Christ with His greatest prophet, He decisively chose to magnify a holy washing—a baptism.

It is obvious that John the Baptist was the way preparer for the Christ.  This fact was not only prophesied by Isaiah and Malachi, but it was attested by John as well: …for this purpose I came baptizing with water, that he might be revealed to Israel (John 1:31).  However John the Baptizer not only prepared the way of the Christ, he also prepared the way for Christian Baptism.  When the Savior instituted the wondrous sacrament of Holy Baptism, He did not do it “out of the blue”, for in John the Baptist’s God-ordained work there was a holy preliminary and precedent for Holy Baptism. By John’s Baptism of the multitudes in the Jordan River the Apostles were readied for Christ to institute His Church’s water-Sacrament at His ascension.  Though the Old Testament sacred washings as well as traditional Jewish washings magnified the concept of sacred washings, nothing prepared the Jews for Christian Baptism more than the baptism performed by John the Baptist.

So what were the marks of John’s baptism that were nearly identical to Christian Baptism?  Both were/are baptisms linked to repentance, and both imparted/impart forgiveness of sins.  Both John’s baptism and Christian Baptism pointed to the Christ; granted, one pointed ahead and the other points mostly back in time.  Both were commanded by God.  Finally, both utilized water, as is the nature of sacred washings.

Matthew 3:3
οὗτος γάρ ἐστιν ὁ ῥηθεὶς διὰ Ἠσαΐου τοῦ προφήτου λέγοντος• Φωνὴ βοῶντος ἐν τῇ ἐρήμῳ• Ἑτοιμάσατε τὴν ὁδὸν κυρίου, εὐθείας ποιεῖτε τὰς τρίβους αὐτοῦ.
For this is he who was spoken of by the prophet Isaiah when he said, "The voice of one crying in the wilderness: 'Prepare the way of the Lord; make his paths straight.'"

Matthew 3:5
τότε ἐξεπορεύετο πρὸς αὐτὸν Ἱεροσόλυμα καὶ πᾶσα ἡ Ἰουδαία καὶ πᾶσα ἡ περίχωρος τοῦ Ἰορδάνου,
Then Jerusalem and all Judea and all the region about the Jordan were going out to him,

Matthew 3:6
καὶ ἐβαπτίζοντο ἐν τῷ Ἰορδάνῃ ποταμῷ ὑπ’ αὐτοῦ ἐξομολογούμενοι τὰς ἁμαρτίας αὐτῶν.
and they were baptized by him in the river Jordan, confessing their sins.

Matthew 3:7
δὼν δὲ πολλοὺς τῶν Φαρισαίων καὶ Σαδδουκαίων ἐρχομένους ἐπὶ τὸ βάπτισμα αὐτοῦ εἶπεν αὐτοῖς• Γεννήματα ἐχιδνῶν, τίς ὑπέδειξεν ὑμῖν φυγεῖν ἀπὸ τῆς μελλούσης ὀργῆς;
But when he saw many of the Pharisees and Sadducees coming to his baptism, he said to them, "You brood of vipers! Who warned you to flee from the wrath to come?

Matthew 3:9
καὶ μὴ δόξητε λέγειν ἐν ἑαυτοῖς• Πατέρα ἔχομεν τὸν Ἀβραάμ, λέγω γὰρ ὑμῖν ὅτι δύναται ὁ θεὸς ἐκ τῶν λίθων τούτων ἐγεῖραι τέκνα τῷ Ἀβραάμ.
And do not presume to say to yourselves, 'We have Abraham as our father,' for I tell you, God is able from these stones to raise up children for Abraham.

Matthew 3:10
ἤδη δὲ ἡ ἀξίνη πρὸς τὴν ῥίζαν τῶν δένδρων κεῖται• πᾶν οὖν δένδρον μὴ ποιοῦν καρπὸν καλὸν ἐκκόπτεται καὶ εἰς πῦρ βάλλεται.
Even now the ax is laid to the root of the trees. Every tree therefore that does not bear good fruit is cut down and thrown into the fire.